a2 Milk™ Sustainable Agriculture Landcare grants support farmers by helping them invest in the infrastructure and land management needed to improve the sustainability of their operations.

In the 2019/20 round, four a2 Milk™ farmers from New South Wales and Victoria were supported with grants funded by The a2 Milk Company™ to build infrastructure that decreased their reliance on on-grid power and improved energy efficiency in the dairy shed. This case study showcases their investment and the outcomes that helped make their dairy farms more sustainable.

In partnership with Landcare Australia since 2017, more than $600,000 in funding has been provided to a2 Milk™ farms through the a2 Milk™ Sustainable Agriculture Landcare Grants.

Grant projects that receive funding must enhance the sustainability of certified a2 Milk™ dairy farm operations and focus on one or more key priority areas.  Energy reduction is one of these key priorities.

Installation of a 55kw solar system Tim Billing and son Johnathan on their NSW Mid North Coast dairy farm. Tim is an innovative farmer who wanted to reduce his on-grid reliance and carbon footprint.

Tim Billing takes an innovative approach to his dairy operation on the Mid North Coast of NSW. When he applied for a 2019 grant, he saw an opportunity to invest in solar to reduce his reliance on on-grid power with an environmental benefit.

“It was a good opportunity to reduce the financial hurdle involved in investing in the operation on my own,” Tim said, adding it was also a chance to modernise the operation.

Tim used the grant to install solar panels and a heat recovery system to use the lost heat from milk refrigeration.

With the solar system up and running from the end of June 2020, Tim said the results were “eye-opening” as the solar and the newly installed heat system cut down the amount of on-grid power the dairy uses.

“We compared our usage from November to February 2020 with the same period the following year and noticed we cut on-grid power by 25 per cent overall,” Tim said.

Tim explained the two systems worked well with the operation, with the solar panels at times providing 100 per cent of the power for the grain milling when operated in the middle of the day. He also explained the heat recovery system has two inverters that are synchronised with the dairy’s operations, drawing on solar energy when it is available.

Tim plans to install more solar to maintain and build on the current system’s benefits to the farm.

Installation of a 60kw solar system and glycol cooling system 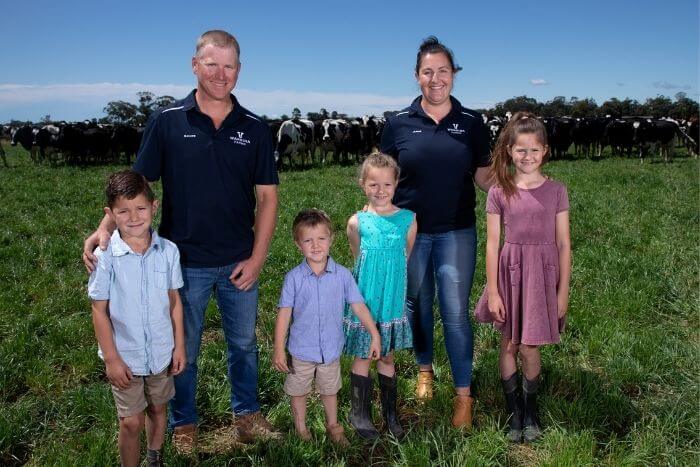 The Fitzgerald family on their farm at Warrina Dairy.

Restricted by some ageing dairy equipment and reliance on pulling power from the grid, Scott and Anna Fitzgerald concluded that to grow Warrina, their dairy farm in northern Victoria, they needed to invest in technology.

In 2019, they were awarded an a2 Milk™ Sustainable Agriculture Landcare Grant to support their investment in 60kW of solar panels and a glycol cooling system that brings milk temperature down faster and more efficiently. The technologies paired together meant the Fitzgeralds used less power overall and could supplement it with solar.

At the same time the panels and the cooling system were up and running, the Fitzgeralds also increased their herd, creating a bigger milking task but without a corresponding power bill.

“We haven’t seen a dramatic reduction to our power bills, but this is because we’ve increased our cattle numbers,” Scott Fitzgerald said, adding the glycol system had proved a success.

“Milk is now cooling at a much faster rate, and we’re seeing an improvement to our milk quality,” Scott said.

During the 2020 summer, Scott pointed out the solar panels could supply all the energy for the dairy shed between 8 in the morning to 1.30 in the afternoon.

“We didn’t use any energy [from the grid] over December 2020 despite cooling large water silos, the glycol tank and the water heating system,” Scott said. The glycol cooling system control panel on the Fitzgerald’s farm, is partially powered by the solar panels that were installed with the support of the a2 Milk™ Sustainable Agriculture Landcare Grant.

Following the successful installation of solar panels in 2013, Garry Wachter wanted to install more batteries to reduce the amount of on-grid power he was using on his north-eastern Victorian dairy farm.

Wachter received an a2 Milk™ Sustainable Agriculture Landcare Grant in 2019 to further invest in the operation’s solar and battery systems. The anticipated benefit once installed was that the additional battery capacity would store energy that was previously lost because the dairy wasn’t drawing on it.

The project experienced some delays, but Garry Wachter said overall it was successful, turning the system on early May 2021.  “I am expecting significant savings because of the additional batteries. The solar panels generate energy that takes care of the heating and cooling of water, later in the day they charge the batteries that help with the afternoon milking,” Garry said.

Installation of a solar pump 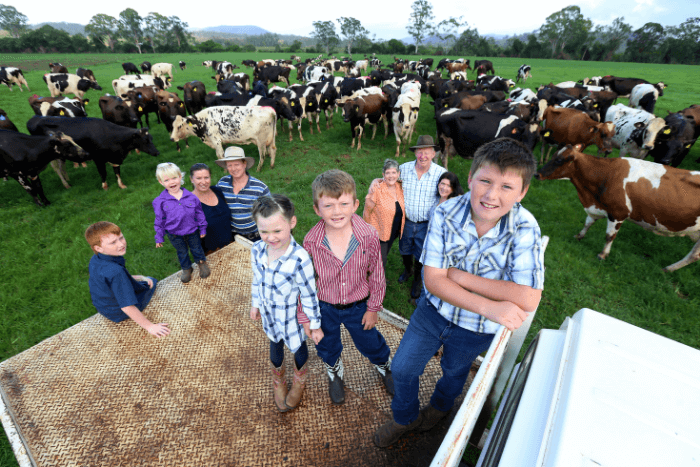 Clearly family with their herd

To make Hastings Park, his NSW Mid North Coast dairy farm more sustainable, Leo Cleary decided to reduce on-grid electricity needed to wash down his newly constructed feed pad. The pad was already delivering environmental benefits as its gradient and layout of drains and pumps allowed him to recycle water, cutting water use by 50,000 litres per day.

The installation of the solar water pump has cut on-grid power because it is fully powered by solar energy.

“The installed solar water pump has helped cut our energy bills by around $600 per month,” Leo said.

The combination of the solar water pump and feed pad is part of a larger picture. The operation takes a holistic approach to improving the environment, by cutting down its reliance on on-grid power, and repurposing cow manure as a fertiliser for the property’s pastures.

“From the environment, animal welfare, the way we treat our staff to the future of the farm with a succession plan in place, we operate the dairy, so we’re leaving it in a better position for the next generation,” Leo said.