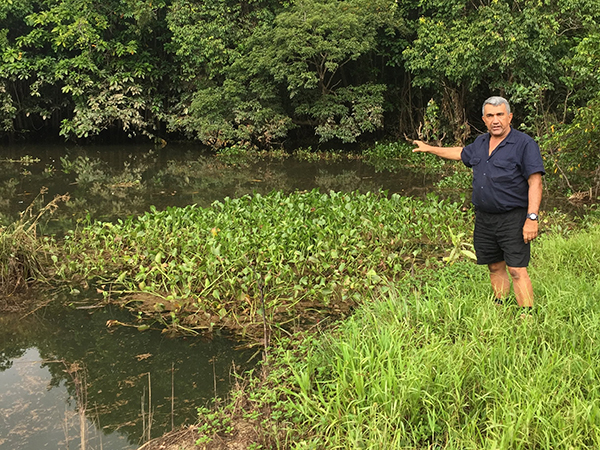 Lenny Parisi is building lagoons on his property to help improve the water quality flowing into the Great Barrier Reef.

For over 30 years, Lenny Parisi has grown sugarcane on the banks of the Mulgrave River in Fishery Falls, Queensland, with his family. Like most sugarcane growers, he has been making significant on-farm changes to improve productivity and protect the environment.

Lenny has a strong connection to the environment and often spends time fishing or diving on the Great Barrier Reef in his local area and further north near Cooktown.

“I’ve got my hands in the reef which probably makes me a better farmer,” Lenny says.

“I’m looking at the problem from both ends – I’m making on-farm changes to reduce runoff and improve sustainability, but I’m also seeing the effects on the reef at the other end.”

Lenny’s grandfather originally planted cane during the war when times were tough. A lot has changed since then and one of the things Lenny is doing is restoring vegetation that was cleared during those early years.

“I’m working with the Mulgrave Landcare and Catchment Group to revegetate areas of my farm that aren’t suitable for cane,” Lenny said. “We’ve now planted trees over seven hectares and hope to restore the area back to its original state.”

But as he will tell you, large-scale revegetation doesn’t come without its challenges. Like most farmers, Lenny spends a lot of his time controlling the spread of invasive species.

“We’re always doing what we can around the farm to stop the spread of introduced species or remove things that shouldn’t be here,” he said. “For me, I’ve got pond apple and Singapore daisy that I’m working hard to clear.”

Both species are major weeds, particularly in Queensland’s Wet Tropics, and can rapidly out-compete native species.

“I had Singapore daisies right throughout the block when we first started,” said Lenny. “We’ve worked hard to keep them under control, sometimes spraying them out if we really need, but we always try natural methods first.”

For Lenny, it’s the natural methods that sometimes make all the difference. Like many growers in the area, he had problems with wild pigs eating and damaging his sugarcane before he adopted green cane trash blanketing.

“The pigs still like the cane, but they often get diverted to the worms that live in the trash,” he said. “At least the damage is now spread out and not focused just on the cane.”

Green cane trash blanketing also helps to retain valuable soil moisture and nutrients. Because of these benefits to soil health, growers can also apply less fertiliser and undertake less groundwork to control weeds on their property.

While he’s certainly got a lot to be proud of, Lenny has no plans to slow down any time soon. Looking towards the future, he hopes to continue re-purposing areas of his farm to benefit the environment.

“With Landcare, we’re looking to build a larger lagoon on another swampy region of the farm that isn’t great for growing cane,” he said. “Over time not only will this bring more wildlife and local vegetation into the area, but it will help to improve the water quality flowing to the reef.”

Recently, Landcare volunteers visited his farm to plant another 1500 trees along areas of his riverbank that were lacking vegetation.

“This will help to rebuild the banks of the river and establish a wildlife corridor,” Lenny said. “We’re already starting to see an increase in birdlife in the area which will continue to increase after the second lagoon is completed.”

With all of these changes taking place, it certainly seems like a bright future is on the horizon for this Fishery Falls farmer.