Every state and the ACT have extensive areas of run-down farmland. No longer viable for traditional farming, these tracts have huge potential for conservation and associated economic activities.

Public servants and lovers of the bush, Bernie Fox and Sue Hayman-Fox recognised this long ago. In 2003 the couple bought 621 hectares of grazing country and sandy mallee woodland on the Big Desert fringe halfway between Melbourne and Adelaide that they named Mali Dunes. They turned the property into a dedicated wildlife sanctuary used for wildlife rehabilitation and education, while also rehabilitating local vegetation. 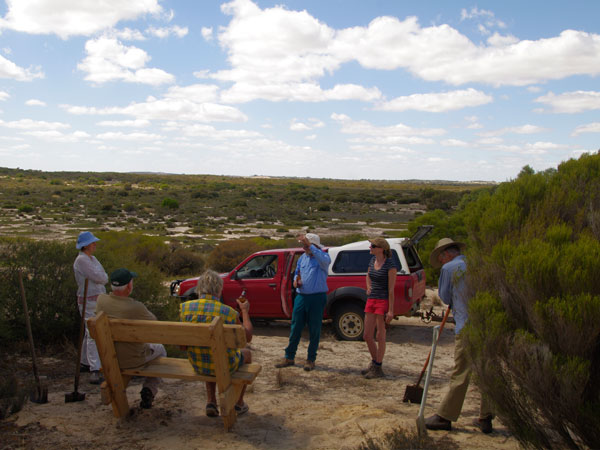 From the 1950s to the 1970s, the Australian Mutual Providence Society ran a vast land development scheme stretching far into South Australia, with pairs of bulldozers towing heavy chains to bowl over the low scrub. This included Bernie and Sue’s block, which was chained in the 1960s, and again in the 1990s. Luckily mallee trees regrow, seed stays in partly disturbed soil, and the contractors left substantial bush patches. This offered a chance to protect the emblematic lowan, or malleefowl. Some of their ‘mounds’, which are giant piles of rotting leaves serving as heat sources for incubating eggs, survived the conventional farming.

Sue and Bernie embraced reptile-friendly pest control to protect their two goanna species, which are both rabbit predators. Weeds were dealt with by hand, and they put up and monitored nest boxes. Seed collecting became a passion, including porcupine grass – a brilliant habitat for small mammals and birds. The couple developed a fire plan, baited foxes, and worked on a new corridor linking a nearby 240-hectare reserve via their property to other public land, thereby creating some 1,700 hectares of continuous habitat. Discoveries of curl snakes and the small marsupial ningaui, both thought to be eliminated by European settlement, vindicated the Fox’s tireless efforts.

A new road was built in 2008, and the next year work started on an underground Terradome concrete house within a dune, which promised insulation and minimal landscape impact. Sue and Bernie moved in to the self-sufficient site in 2011, which has on-site water collection, solar power, and a composting toilet.

Sadly, the inspiring Bernie died on 12 April 2016, ending a fine and fruitful partnership. Sue loves her land and will carry on with their many friends who want to help with this exemplary project. Sue and Bernie are an example that shows how our communities can restore lost ecosystems and bring back wildlife, even in harsher Australian landscapes.