Fishing out weeds not a one off

Ongoing monitoring and follow-up is a critical aspect of weed management. All too often, weed control programs start with a bang and then fizzle, resulting in weeds re-establishing and wasting the initial effort.

It’s rare that a weed control program achieves 100 per cent effectiveness without the need for follow-up – be it just monitoring or secondary treatments of herbicide or other forms of control such as physical removal. 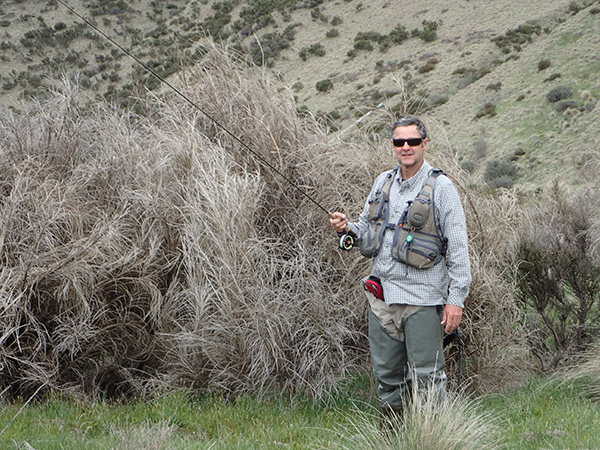 Ian Towers with a successfully treated thicket of Scotch broom along the Eucumbene River.

Failure to follow-up initial treatments can result in an ongoing cycle of weed management, costing extra money and resources. Where eradication is possible, there’s no point in doing half the job. The focus should be on follow-up; over the long-term, follow-up has the potential to achieve the most cost effective means of preventing reinfestation.

A couple of years ago while fishing for trout on the upper Eucumbene River in the Kosciusko National Park, I noticed there had been a quite rapid colonisation of Scotch or English broom (Cytisus scoparius) adjacent to the river. Apart from the environmental threats posed by this invasive weed (crowding and shading out plants like alpine pineapple grass, kunzea and candle heath), its tendency to form thickets along one of my favourite rivers could make the river inaccessible.

In Australia, brooms invade native vegetation, forestry and pastoral systems, where they cause significant environmental and economic impacts. There are several other broom species that are included with Scotch broom as Weeds of National Significance (being Montpellier broom, Genista monspessulana; and flax-leaf broom, Genista linifolia).

In NSW, Scotch broom mainly infests areas above 600m and is a currently recognised as a serious weed in parts of the Kosciusko National Park. The infestation along this part of the Eucumbene River was a new infestation.

I returned to the area in November 2017 and pondered how extensive the broom thickets might be and whether they would limit access to the river.

But I didn’t see what I expected. There was an absence of dark green thickets of broom; instead, I saw thickets of dead broom. The NSW National Parks and Wildlife Service had launched an assault of the invading broom – likely in 2016.

A landscape of dead broom resulted from a targeted effort, while very few native plants were affected. The control program must have involved an incredible effort because the broom was dotted singularly and in thickets along the river – and every one appeared to have been killed. 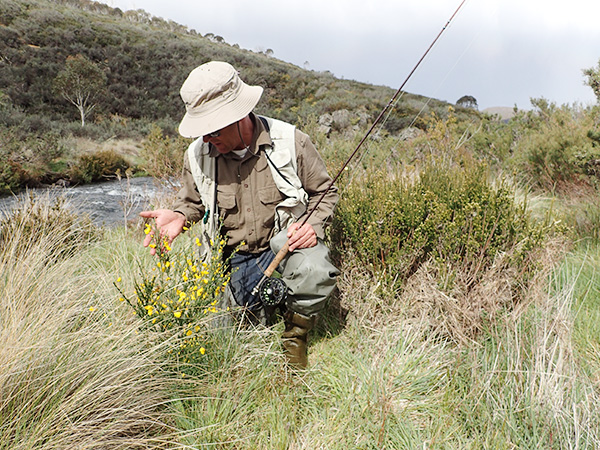 But as I walked up the river, it became evident that the big effort in treating the broom could be wasted. I could see the odd broom ‘hiding’ amongst the alpine grevilleas and other heaths, revealing themselves with their stark pea-like yellow flowers.

The damp spring seasonal conditions allowed me to uproot about 20 plants, but a few larger specimens thwarted my quest, and the harder I looked, the more I saw. I gave up.

The saying “one year of weeds is seven years of seeds” reinforces the need for follow-up in weed management. In the case of broom, one year of seeds can persist for decades; long-term follow-up is a necessity.

Will I return in a few years’ time to find broom has reinvaded? I hope not. A small effort ‘now’ and a bit each year would ensure the initial treatment achieves its goal.

I applaud the NSW National Parks and Wildlife Service for the weed management plan for this pristine and vulnerable area. Unfortunately, the easy and cost-effective option of follow up management of preventing further weed infestations is tied to government priorities, funding, and resourcing.

Similarly, management of the nursery industry to prevent and enforce policies around bans on the sale of weeds of national significance will also make a significant contribution to reducing new infestations in the environment.