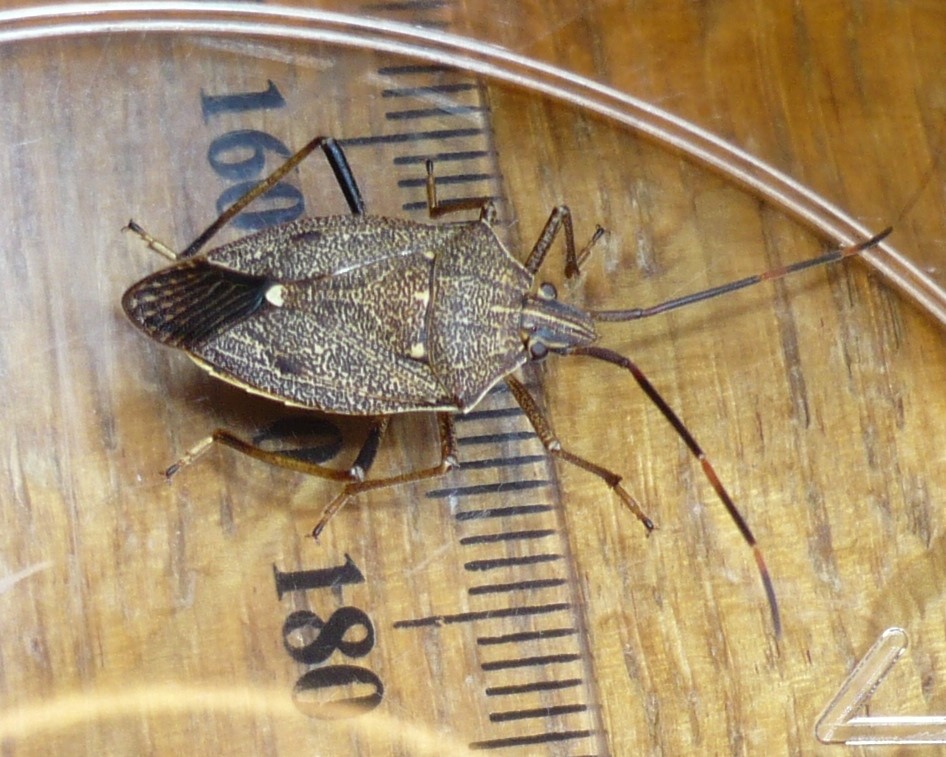 When a staff member walked into Warren Birchmore’s office with a suspicious looking bug on her jumper, Warren immediately thought of the brown marmorated stink bug (BMSB).

“I was aware of the BMSB problem due to the recent publications and alerts, so I had heightened awareness,” Warren said, who is viticulture systems manager at Accolade Wines, based at Reynella.

“When I pointed out the bug on her jumper, she instinctively flicked it off and it flew away. But I knew I needed to catch it for identification. I managed to catch it and contain it in a jar, which was hard to do as the bug was very active,” he said.

The next step was finding information to assist with identifying the bug.

Together they identified some of the distinguishing features of the bugs that Warren could use to initially discount the bugs it was likely not to be.

“Suzanne also suggested putting the bug in the fridge to slow it down, which was a great tip. Once the bug was sluggish, I put a ruler under the jar for scale, and took photos using the flash function,” Warren said.

“This was also a good move, because the colours and markings on the bug showed up vastly different in the photos when I used flash. I thought the bug was a brown grey colour, but it was actually dark brown to black, with yellowish spots. That was a real eye opener – the colour differences between the naked eye and the camera.” The markings on the bug and the number of antenna sections were also helpful in identification.

“The bug we caught had four antenna sections, while the BMSB has five. I was fairly certain it wasn’t a BMSB, but I wanted to be sure.”

Suzanne put Warren in touch with South Australian Research and Development Institute (SARDI) entomologist Greg Baker who was able to confirm that the stinkbug in question was a native gum tree shield bug.

“It was a relief that our bug wasn’t the BMSB, which is exotic to Australia and we really don’t want it here,” Warren said.

“It was a good process to go through for me, because now I’m familiar with the steps for identifying or reporting a suspicious pest.”

Warren says vineyard staff are key to monitoring for unusual pests, as they are looking at vines every day.

“Our vineyard managers are well versed in knowing what pests and diseases could appear and are always on the lookout for something unusual. If they do spot something, they immediately investigate it, either internally within Accolade or outside with organisations such as Vinehealth or SARDI,” he said.

“And all of us in the industry need to be vigilant. It’s much better to be alert and get unusual insects or diseases identified, than to ignore the problem, and suddenly it’s everywhere.”

Suzanne said Vinehealth Australia was constantly looking at ways to make the pest and disease identification process easier for growers.

“With new pest pressures on our doorstep, we’re focused on preventing the entry of exotic pests, as well as ensuring growers know what to do if they find something unusual. We’re here to help,” Suzanne said.