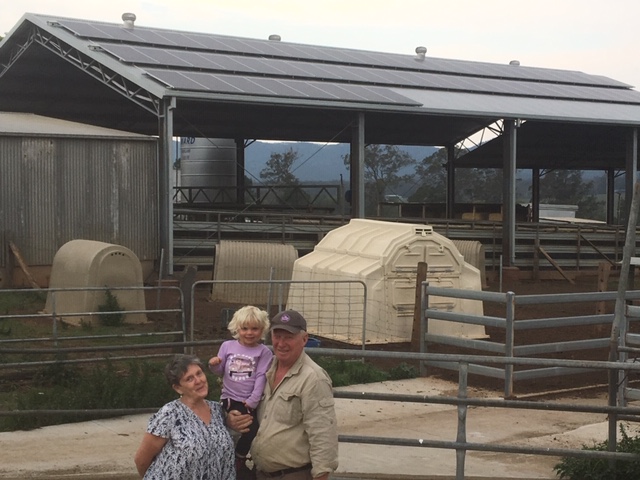 Luke and Ruby Cleary in front of the new feed pad

With nearly 120 hectares of mainly irrigated dairy pasture, Hastings Park is a highly productive dairy farm with a herd of 350 cows. Owned by Leo and Sue Cleary, the farm, located in the New South Wales mid north coast, produced 2.8 million litres of milk in 2017/2018.

The Cleary’s work hard to make improvements to the farm as time and funds permit.

Improvements over the past few years include fencing all river frontage to prevent cattle access and ensuring numerous water troughs are in place for the cattle. A couple of years ago, the dairy built 24 aside rapid exit units with milk storage capacity of 22,000L. Auto drafting allows cows treated with antibiotics to be milked last.

A gravel feed pad with concrete troughs is used to feed silage when required, especially in drought.  In addition, a computerised individual feeding system was installed in the dairy that automatically adjusts the amount each cow receives according to the cow’s production.

Hasting Park is one of 28 certified a2 Milk™ dairy farm across Australia that has been selected to produce only the A2 protein and none of the A1 protein found in regular cows’ milk.

In 2017, to make further improvements their farm, the Cleary’s received an a2™ Sustainable Agriculture Landcare Grant of just under $9,000 for a project focussing on distributing dairy waste water over a large part of the farm to assist pasture growth over the whole irrigated part of the farm.

With the success of the above project, the Cleary’s decided to apply for another a2™ Sustainable Agriculture Landcare Grant the following year for a project to reduce electricity costs by installing a Solar Power System in the dairy.

In November 2018, the Cleary’s were successful with their second application for an a2™ Sustainable Agriculture Landcare Grant.  This time, they received $40,000 in funding.

Solar installation at the dairy was completed in May 2019. Unfortunately, due to financial hardship because of the drought, the irrigation pump solar installation wasdeferred until seasonal and profitability have improved.

Installation of the solar panels resulted in a 12-15 percent savings on utility costs.  The Cleary’s had hoped for greater savings.  However, they believe one of the reasons for this is that increased herd numbers resulted in higher electricity usage of 4.29 percent for the winter 2019 electricity bill.

They also commissioned an energy audit to learn what else they could do to save on electricity.  The audit found that prior to installing solar panels; they were using energy in off-peak times to save on their electricity bills.  However, solar energy is created during “peak” times.  Therefore, in their current set-up, if the energy created by the solar panels isn’t used, it is fed back into the grid.

Energy savings are expected to increase as these process changes are implemented.

The Cleary’s are keen to share these learnings with other farmers. Leo says that, “At a time when other costs especially purchased feed have increased greatly, the savings we’re seeing are a big help.”

The farm will continue to operate as a dairy into the future with an intergenerational succession plan now in place.