The 2018 Coca-Cola and Landcare Australia partnership funded seven coastal protection projects with grants of up to $15,000 each, awarded to groups in three states.

Following are highlights of outcomes achieved by the seven 2018 projects: 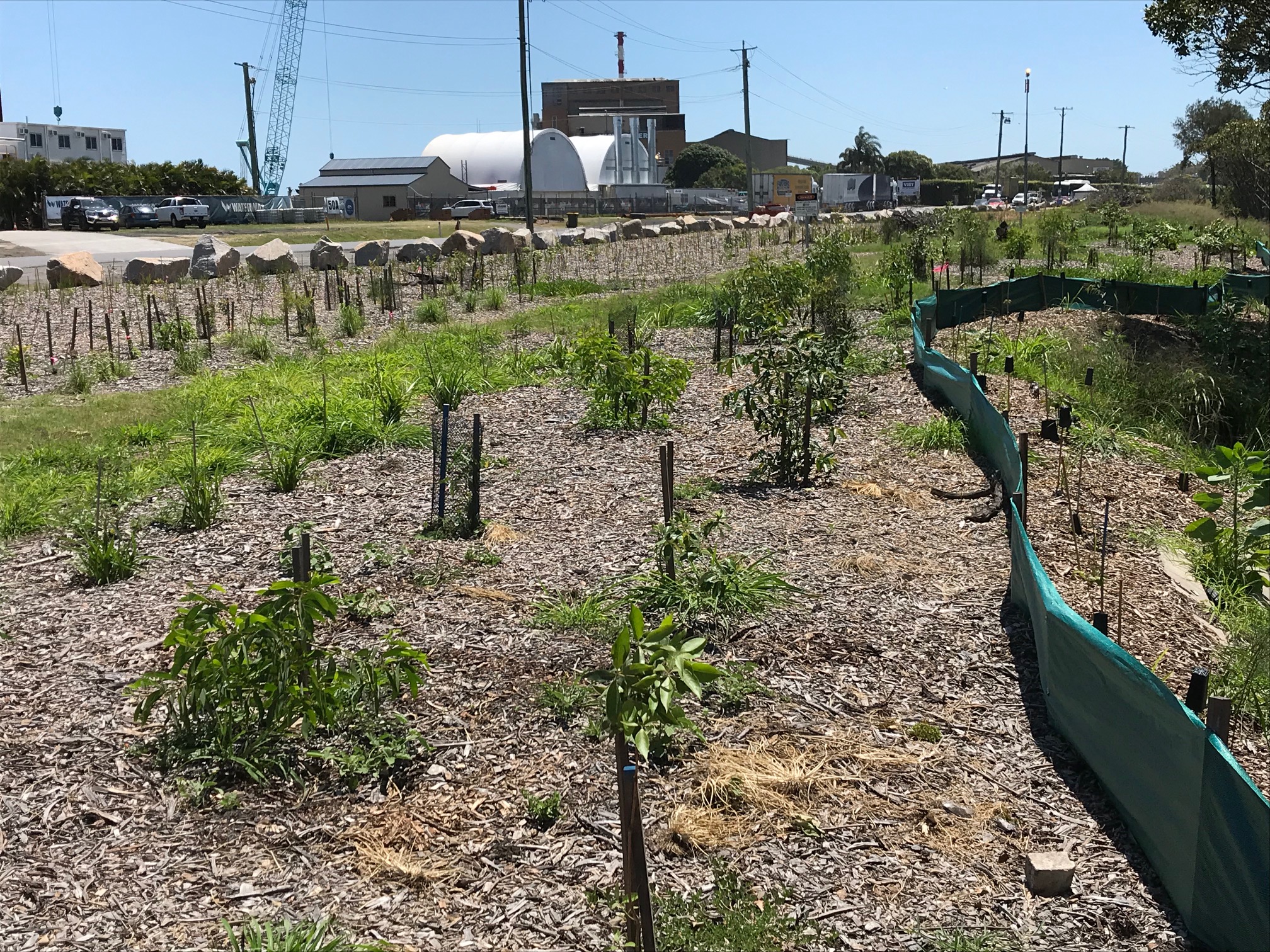 Six months into the project-after revegetation

The 2018 Coca-Cola Foundation and Landcare Australia Coastal Protection Grant kick-started the Gibson Island Rehabilitation Project. Before works were undertaken the site was degraded and neglected, it is now on the way to being a full riparian vegetation community, and a functional native environmental buffer on the edge of an industrial zone.

Bulimba Creek Catchment Coordinating Committee (B4C) is experienced in successfully engaging with the community in restoration projects. As the location of the Gibson Island Rehabilitation Project is relatively isolated, the focus was on both community and industry involvement.

Before the program started, the site was an open clear site with limited habitat structure or diversity. Due to the high diversity of birdlife evident in the adjacent weedy vegetation which was absent in the cleared areas, B4C installed a number of woody debris habitat features, including adding large logs to the planting areas, and creating large mounds of tree branches. This provided foraging sites and cover for a number of species, such as lizards and small birds.

The works undertaken have reduced illegal dumping and land use, increased positive involvement from local industry and the community. Positive environmental outcomes include:

In addition, B4C staff and volunteers, the events have been attended by representatives (and their families) from a number of different companies – including Qld Urban Utilities, Visy Industries, Port of Brisbane, Pelican and Sea Bird Rescue, New Hope Group, APA Group, Incitec Pivot, Queensland Conservation Council and Powerlink, in addition to a number of sitting members. The project is a showcase of effective collaboration across community, industry and the government to produce greater environmental outcomes.  As well as being involved with the volunteering part of the project, many of these companies have donated funds or services to the project.

Project: Much More than a Clean Beach! 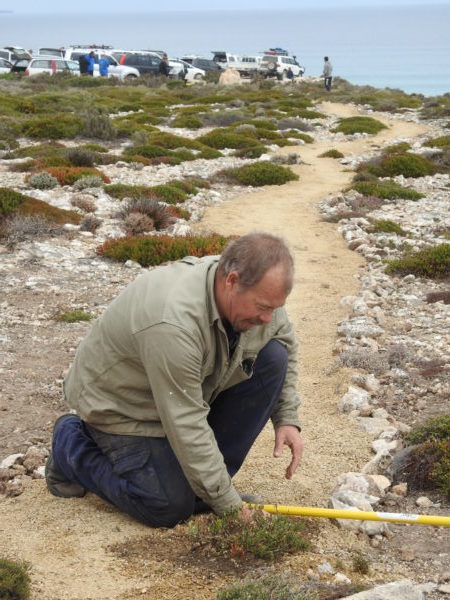 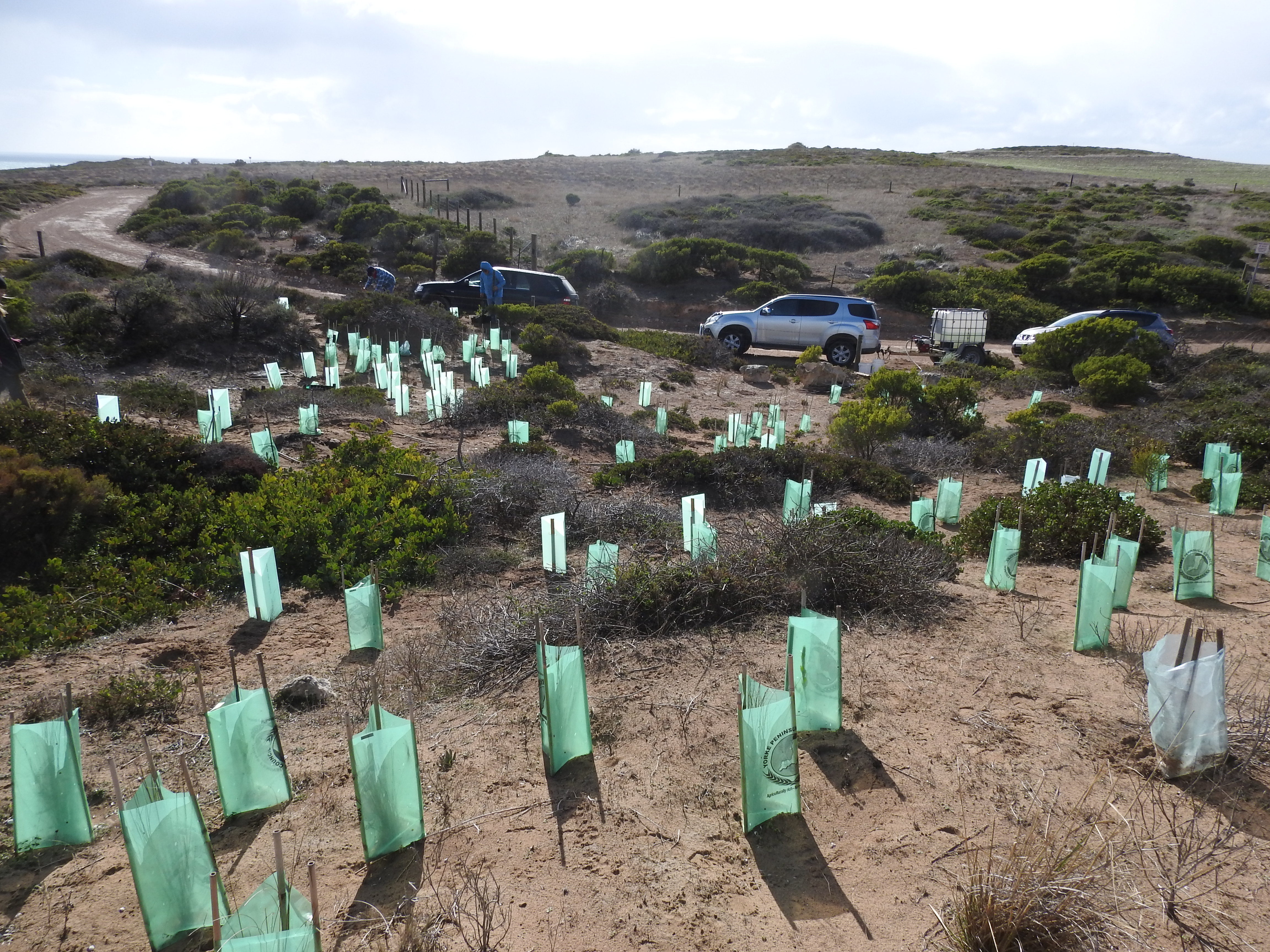 Planting – Enhancing the biodiersity of the coastal region, increasing habitat and reducing erosion

The Formby Bay Environmental Action Group identified the coast between Corny Point and Point Margaret on the Southern Yorke Peninsula as an area that was affected by marine debris/litter, illegal 4WD activity and a lack of native vegetation. With the help of the Coca-Cola Foundation and Landcare Australia Coastal Protection Grant the group was able to undertake a project that saw the improvement of 17 locations along this coastal area.

Three litter collection events occurred, which included participation of a range of age groups and protected marine and terrestrial fauna from interactions with hazardous plastics and other types of litter. 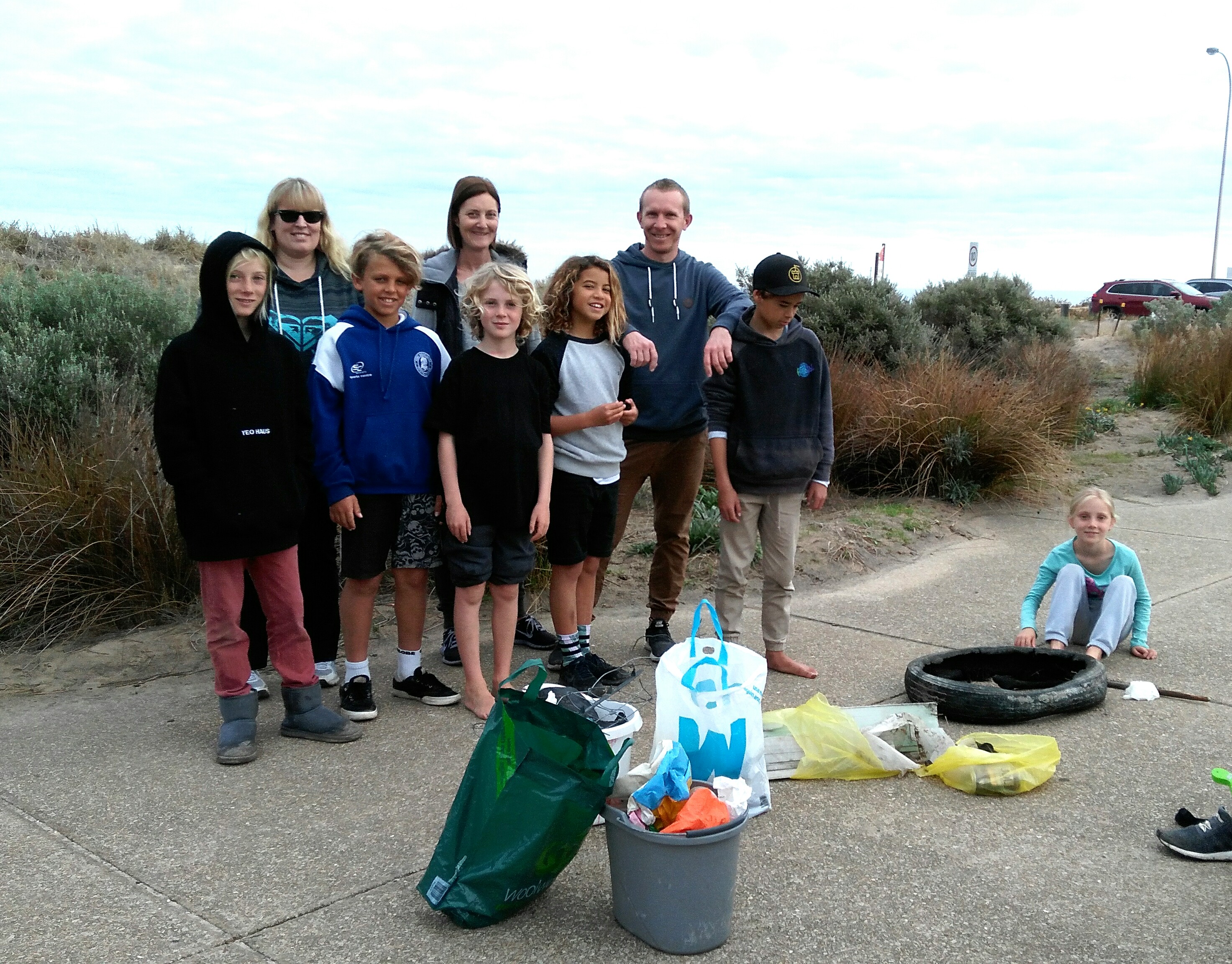 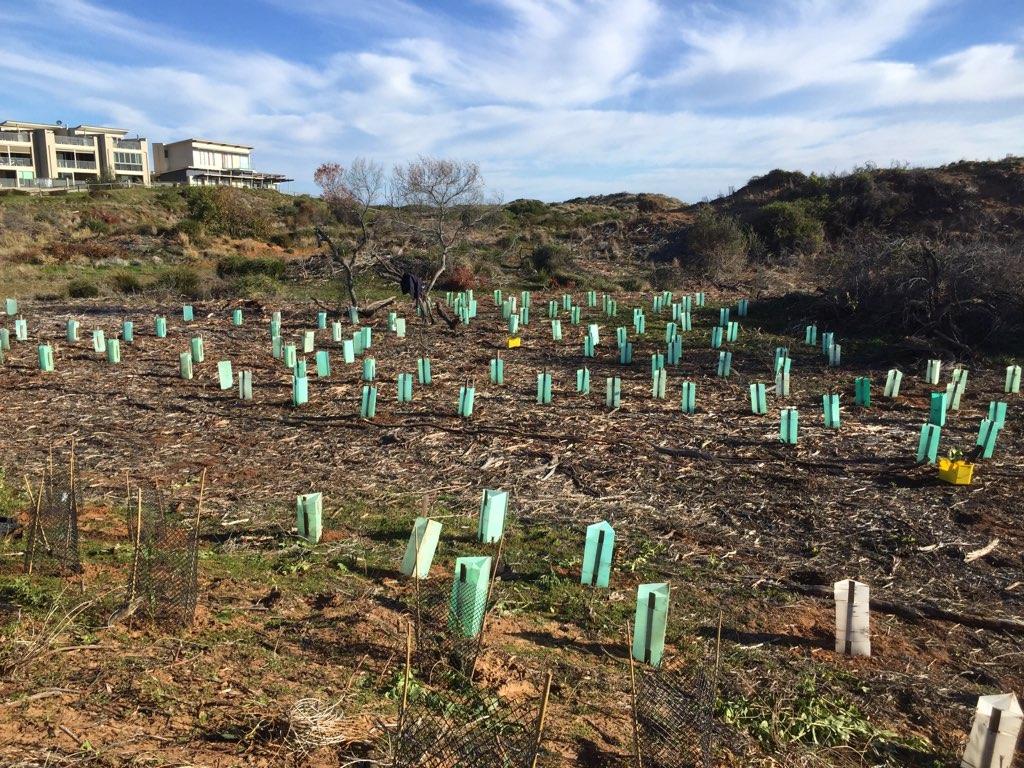 Friends of Moana Sands Conservation Park (FoMS) set out to transform an area overrun with invasive plant species in the Moana Sands Conservation Park dunes, to an area with diverse native vegetation and free of rubbish, all the while engaging the community. With the help of The Coca-Cola Foundation and Landcare Australia Coastal Protection Grant 2018, FoMS was able to clear a large infestation of woody weeds and revegetate the area with native coastal species.

985 seedlings were planted with a school planting day and a community planting day for ‘National Tree Day’. Community planting days provided the best opportunity for local people and schools to contribute to the long term care of the conservation park. The coastal environment benefits from the replacement of invasive species with native species, increasing the biodiversity within the park.

A litter collection day was also undertaken, with plastics and other debris collected by local community members, families along Pedler Creek. Litter and debris are threats to the health of the local animal species and rubbish removal has helped reduce the hazard in the area and also stopped litter entering the surrounding marine environment.

Project: Managing Marine debris from Middleton to the Murray Mouth Making the marine debris activity fun, safe and informative was key. Many students demonstrated, when quizzed from teachers, a better understanding about detrimental effects of marine debris, the coastal environment, aboriginal cultural heritage, bush tucker and the current works being undertaken by various groups in the area.

The group was successful in promoting the project and being able to work in limited access areas through their partnership with Alexandrina council. Also just being present in the field undertaking the marine debris working bees and cleanups with the schools, Ngarrindjeri and Goolwa Coastcare we have attracted the support and involvement of parents of students, the local Bombora Cafe, both regional NRM boards and the Fleurieu Regional Waste depots through processing of the waste collected.

The project has increased the knowledge and awareness of local community about the impacts of litter and pollution on marine plants and animals, as well as grown the capacity and profile of Goolwa Coastcare Group through increased on-ground activities, knowledge sharing and community education/events. 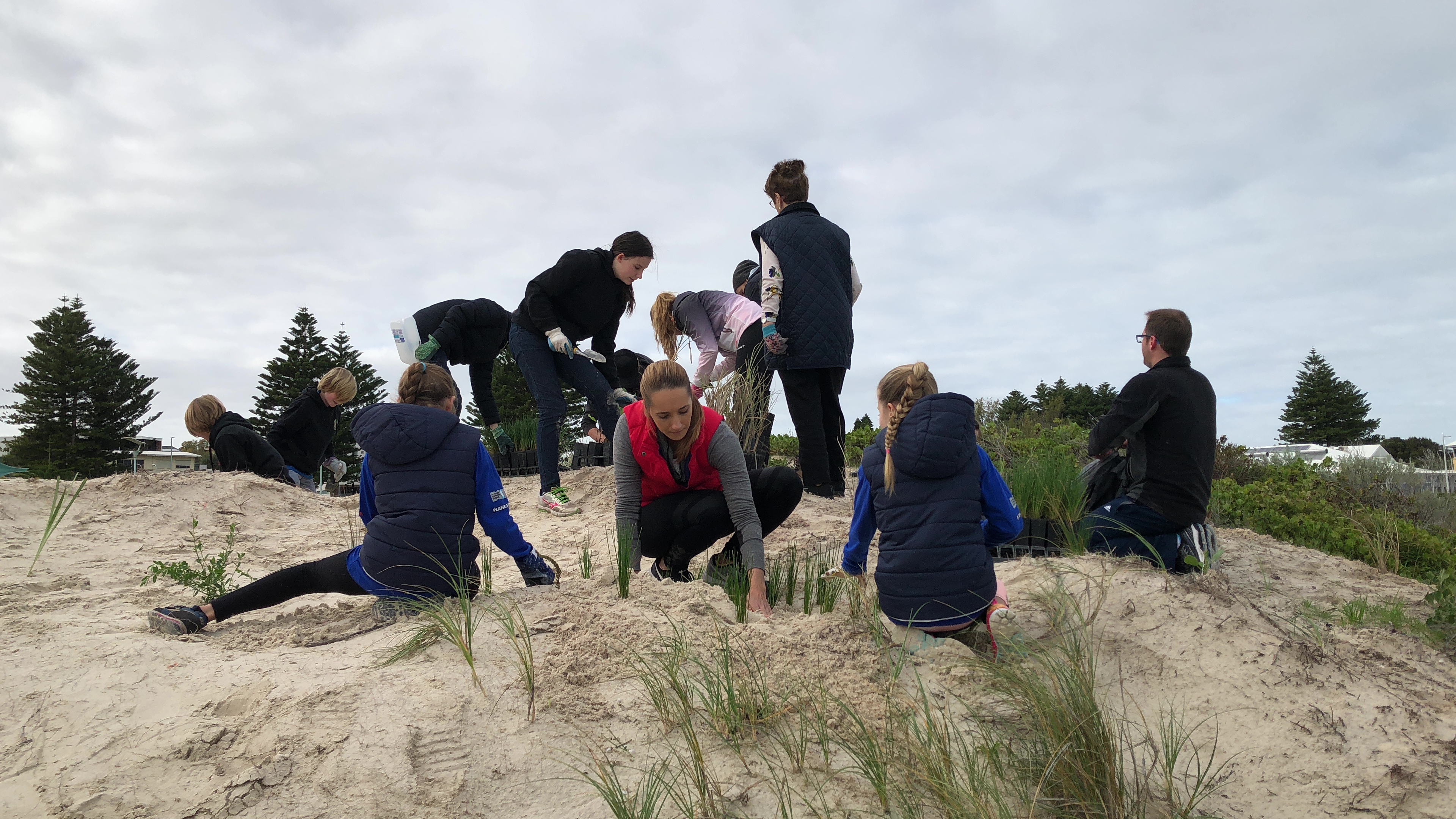 Mullaloo Beach Community Group undertook a project with the primary objective of protecting marine and coastal biodiversity. The Coca-Cola Foundation and Landcare Australia Coastal Protection Grant helped the group to carry out on-ground conservation activities and community education events leading to positive outcomes for the environment and the community at large.

The marine debris collection events reduced ingestion and entrapment hazards for marine fauna, raised community awareness of the severity of the marine litter problem, reduced the amount of litter in the environment and provided data to other organisations working towards long term solutions. These Coastcare events also reached a cross-section of the community with opportunities to connect with and protect their local natural environment.

Weeding works reduced weed biomass, depleted weed seed soil inventory and fostered natural recruitment of native vegetation.  The weeding was then followed by community planting events where 1040 seedlings (propagated and supplied by the City of Joondalup) were used in the revegetation of dune areas. These native species will create stable, ecologically resilient dune systems and raise awareness of native plants and local ecology.

These project activities will continue to maintain and build upon previous efforts by the Mullaloo Beach Community Group Inc. to develop community stewardship of the coastal zone through new volunteers working in coordination with skilled weeding contractors and bush regenerators, with visible changes in weed density and local flora growth.

Project: Bushlink at Dee Why and Freshwater Dunes 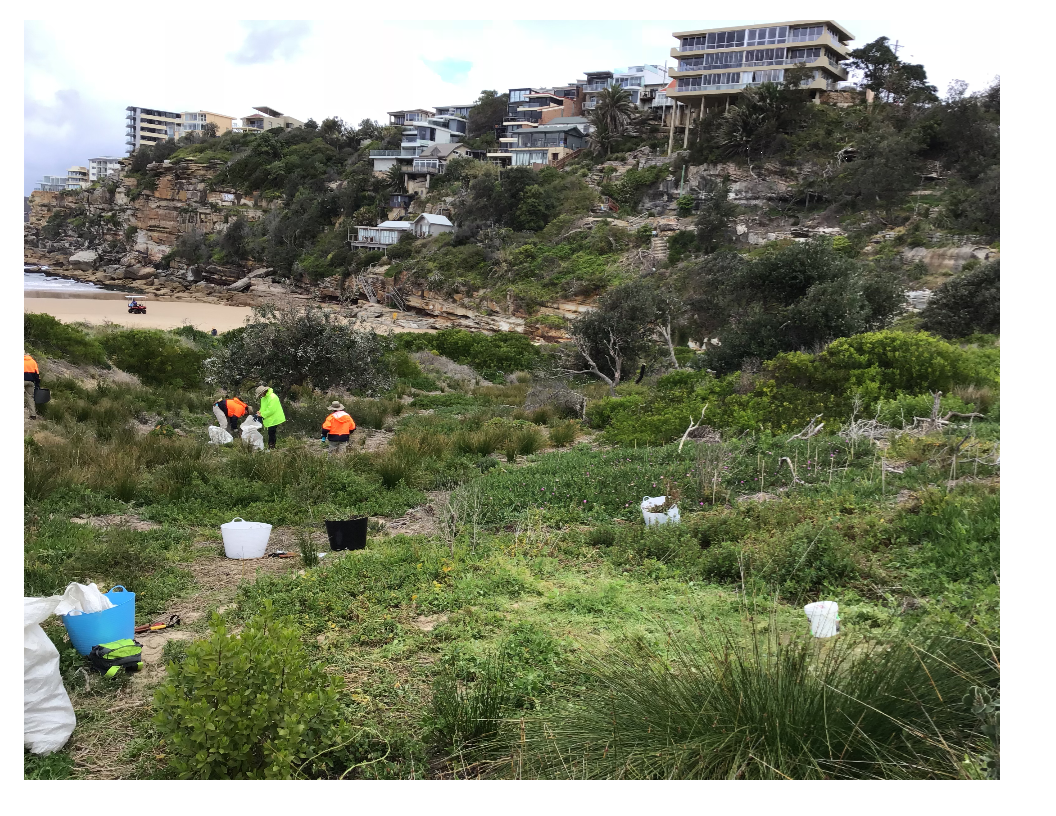 Before photo (left) and after weeding and revegetation (right)

By undertaking bush regeneration techniques, such as weeding, there was a reduction in noxious weeds which created areas viable for revegetation, increased the potential for natural regeneration and increased the biodiversity value of the sites.

450 tubestock were planted at Dee Why Dunes, with a variety of indigenous dune species to help build the diversity of the dunes and improve resilience of the ecosystem. Species consisting of different vegetation storeys (e.g. groundcovers, upright grasses, shrubs and trees) is beneficial to native fauna, providing a source of food and protection from pests and human disturbance. In the future, once the tubestock has established and mature, the revegetated area will also help improve the dune’s resilience to both wind and water erosion.

Rubbish collection throughout the sites has resulted in less making its way either into or returning to the ocean; and has minimised the amount within the dunes which could affect fauna and subsequent ecosystems.

The social outcomes achieved in relation to the employees with disability, centred around their improved self-esteem and confidence achieved through working outdoors and with the community in a role that improves the environment and their physical and mental wellbeing.

Northside Enterprise Inc. also achieved social outcomes through corporate volunteer events and school inclusion program, where corporate and high school volunteers spent a day with Bushlink to learn about inclusion in a unique and positive way. The team members demonstrated and guided the volunteers across both sites, educating them on the work that was being done and what environmental benefits the work was achieving.

Within the community, Northside Enterprise Inc. achieved an increase in awareness and stewardship through community days and through conversation in the field with people passing by. The group used their website and social media platforms to share video blogs and photos of the work being undertaken on both sites. The video blogs were created to increase community knowledge of the project and some of the environmental concerns of the sites (e.g. noxious weeds, revegetation).

The project undertaken by Southern Otway Landcare Network, with the funding from the Coca-Cola Foundation Landcare Australia Coastal Protection Grant, has helped contribute to environmental restoration works in the Wye River township following the 2015 Christmas Day bushfires. The works have supported the improvement of biodiversity values in the post fire landscape.

The site is immediately adjacent to the National Heritage Listed Great Ocean Road. The activities undertaken by the group forms part of a suite of projects that are currently occurring in the fire-grounds of Wye River, restoring the environment and the townscape.

The project has delivered environmental restoration outcomes for two high-profile, protected conservation areas on the Great Ocean Road. Initial and follow-up weed control treatments at the project sites were carried out using a combination of manual and chemical control methods. Initial slashing was undertaken to support site access at the Marengo Wetland site, followed by the treatment and removal of woody weeds.

Revegetation of project sites occurred, following consultation with an ecologist and nurseryman using an appropriate coastal vegetation mix. Revegetation was undertaken to support the functional improvements in the system and restore coastal habitat areas.

Simply fill out the form below to let us know what news you'd like to receive.