Michael Vecchie’s 24-hectare orchard has sandy loam soils that struggle to hold enough moisture for the trees to be their most productive. Coupled with a continuous dry season, Michael was concerned without soil improvement his orchard’s water management and productivity will be badly impacted.

The sandy loam drains water easily meaning Michael has to apply more water than a similar orchard with heavier soils that hold water better. The soil also meant his water saving measures hadn’t been as effective as he’d hoped. An example was the installation of drip irrigation to deliver water where it was needed without wastage.  However, the sandy soil made it less effective.

To overcome his problematic soils and to increase his orchard’s productivity while cutting the amount of water needed Michael decided to improve his soils. To achieve this, though he needed to purchase machinery that could improve the soils.

As a Lion orange supplier, in early 2019, Michael applied for a Lion Orchard Pride Landcare Grant.  He was successful in receiving a grant for $10,000 which enabled him to fund his project.

After consulting with his local agronomist and doing some research on what soil conditioning would best suit his orchard, Michael decided on the best way forward.

He planned to spread manure and compost to improve the topsoil which in turn would increase the organic matter in the soil. This organic matter would encourage microorganisms that hold moisture and lift the nutrients available to the fruit trees.

In addition, Michael planned to mulch around the trees to improve the health of the trees, cut down on weeds, and help the soil keep its moisture.

The end goal, Michael said, was to maximise the water used, to improve the health of his fruit trees and to make more nutrients available to them in order to lift productivity.

The conditioned soils would also improve the quality of the fruit crop, which would benefit his operation.

Michael said he hadn’t been able to condition the soils as he planned because the machinery arrived too late in the season.  However, he was still able to make some improvements. The use of pelleted manure and lime, Michael said, had produced some promising results so far.

As further work is done to improve the soils, more results are expected as the soil health increases the productivity and quality of the fruit produced.

Michael added that more microorganisms in the soil will also improve and stabilise the soils to cut down on erosion.

With the new season Michael will do further work improving the soils with the machinery purchased with the grant.

Learning from the project, Michael explained he was able to identify what the orchard soils needed by soil testing and doing leaf analysis.

“These tests helped determine what needs to be done and also whether or not what I have done has worked,” Michael said.

He said the grant was vital in being able to undertake the work.

“I am privileged to have the help provided to better my on-farm practices,” Michael said. 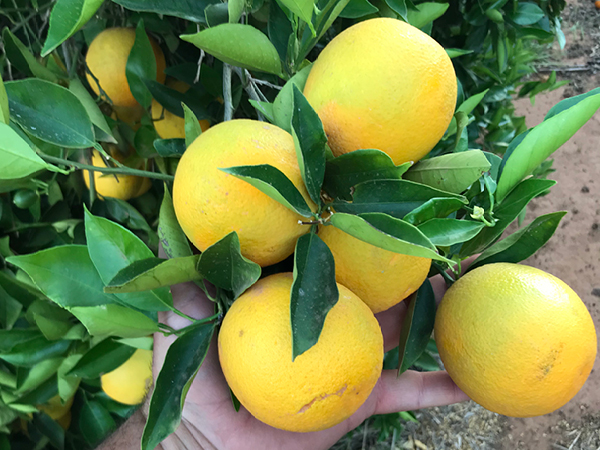 Mulch applied to the trees to conserve moisture and cut down on weeds.