Dryland salinity in Australia impacts landholders, consumers and communities due to loss of production and loss of natural environments.

It is estimated to cost more than $270 million in lost production and remediation interventions, and it affects more than 2.5 million hectares of farming land.

It impacts rural communities directly through:

The research aimed to determine the causes or patterns relating to ‘transient’ salinity and the environmental or seasonal data which indicates or forecasts dryland salinity processes. Initial findings from interpreting the soil probe data showed that there are two different soil salinity processes occurring across the region, often in close proximity.

The next stage is to expand monitoring and interpretation of data to allow farmers to make more informed decisions when managing saline areas, particularly those which are transient and can be scaled one year and then suitable for production the next. A total of 20 stakeholders were involved in the project from the beginning to the end (and engaged with 65 participants in total) – representing 32,170ha of land under management. The majority of those involved were farmers with the remainder being agronomists, consultants or government extension officers who are responsible for sharing information with farmers.

All farmers grew a mix of crops (cereal, canola, lupins, and beans) and pastures (including for hay and lucerne). Two producers grew pastures only – primarily for lucerne and hay production. The most common land use to all producers was growing lucerne.

More than half of the farmer participants reported they were already impacted by salinity and two reported being marginally or potentially impacted.

Interventions to mitigate the impact of salinity included growing lucerne (the most popular), revegetation of sites with salt tolerant species, deep ripping of the soil, fencing off severely impacted areas and growing salt- tolerant cover crops.

All participants rated their involvement in the project as highly useful and the majority said it exceeded their expectations.

Each participant reported the data was very or highly useful and more than 90% said it would improve production communication. As an advisor, Tony Randall supports farmers in managing and dealing with salinity challenges and works closely with groups including the Coomandook Agriculture Bureau, Murray Plains farmers and Browns Well and Loxton Agricultural Bureaus. He is aware of the challenges of making management decisions without good quality data.

Tony has witnessed dryland salinity causing problems in the areas he covers and he provides extension linkages to landholders and groups dealing with seeps, magnesia patches and water table salinity.

After participating in the soil probe trials and associated activities, he says he has more confidence in helping farmers find solutions.

“Knowing this information which has been generated is critical as it allows us to pin point appropriate management actions,” Tony said.

“I like being able to help others who have challenges develop solutions and assisting farmers in sustainable agriculture.

“(I will) use the data to determine the best-bet actions which can be undertaken through trials and demonstrations.” 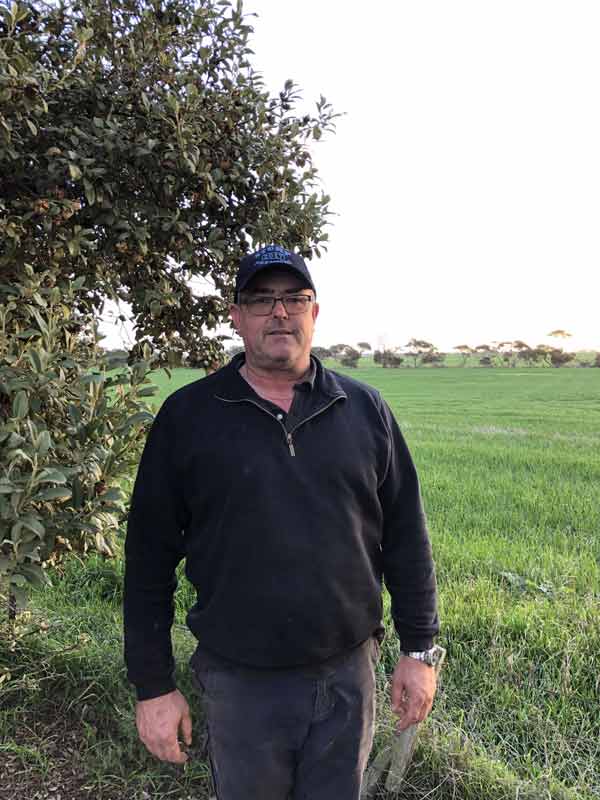 Kevin Roberts hopes his legacy from a lifetime of farming is to improve or reclaim unproductive land while increasing production and leaving his farm in better condition for the next generation.

Having greater understanding of soil moisture levels, through the use of soil probes, and its impact on salinity impacts is helping him achieve these goals.

“Understanding the soil moisture levels and what is happening under that ground has shown me a few things,” Kevin said.

“Firstly, there is potential scope for summer cropping. Then there is understanding the importance of reducing recharge of the areas around the low-lying areas and further reinforcing the need to retain groundcover.

“Also, by using the technology introduced in this project, at the time of sowing we are actually able to see and confirm that the flush we thought was required is actually required.”

Kevin suggests the next step could be sending alerts to farmers when the rainfall has washed through to 30 centimetres (soil depth) to indicate more favourable crop sowing conditions now exist.

“When you can’t control your own decision-making process it can be quite stressful and impacts on my capacity to plan or participate in things,” he said.

“But when I can make well informed decisions it gives me more flexibility and the capacity to participate more in the community.”