An EMU approach to the recovery of landscapes 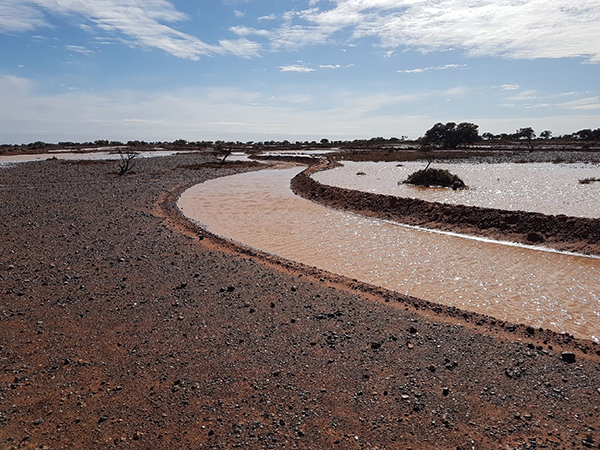 Katalpa Station following the first significant rain since the works were carried out.

The Western Local Land Services region encompasses one of the most diverse rangeland areas in Australia. Comprised of arid and semi-arid land, it is mostly unsuitable for intensive agricultural practices because of constraints such as unreliable rainfall and soil type.

Due to these and other factors, the predecessor agency of Western Local Land Services initiated a rangeland rehabilitation program in 2008. The program’s aim is to rehydrate degraded landscapes affected by soil erosion with a variety of earthwork techniques. This program, which has been continued by Western Local Land Services, involves employing a specialised officer and funding for on-ground projects to assess the degraded landscape, design an appropriate solution and lay out proposed earthworks.

In recent years, Western Local Land Services have used the Ecosystem Management Understanding (EMU) approach. The primary purpose of the EMU approach is to introduce managers and planners to recognising natural patterns and processes and learning to work with them toward the health and recovery of landscapes and habitats.

Positive outcomes have been achieved through the EMU program.

Luke and Sarah Mashford of ‘Katalpa Station’, 85 kilometres west of White Cliffs, were one of six properties that participated in the program in 2017. Following the first significant rainfall after the program was completed, the Mashfords were pleased to see virtually all the water spread and captured by waterholes which eventually resulted in the growth of green grass.

“Knowing the impact that amount of rain would have previously had on erosion makes it very satisfying to see it all caught up in the gilgais,” Luke said. “This water will now rehydrate the landscape which will greatly assist with agricultural productivity and landscape health.”

Richard Wilson of ‘Yalda Downs’, a property 85 kilometres north of White Cliffs, also participated in the program in 2017 and found it to be extremely valuable.

“The work that was carried out did wonders toward the restoration of areas that had suffered from erosion,” Richard said. “Through diversion banks and contour furrowing we were able to rejuvenate a perched floodplain which will have real long term benefits. The program has been really valuable for our enterprise and it is something we would highly recommend other landholders look into.”

In addition to the positive outcomes for the Mashfords and Wilsons, the critically endangered thick-billed grass wren has been identified on the rehabilitated areas in White Cliffs.

Over the last 10 years, 81 rangeland rehabilitation projects, including projects that have followed the EMU approach, have been completed in the Western region, covering a total of 23,650 hectares. This has brought significant improvement to the area, rehydrating degraded landscapes, improving its agricultural productivity and producing environmental benefits.

The EMU property planning program has been supported by Western Local Land Services through funding from the Australian Government’s National Landcare Program.