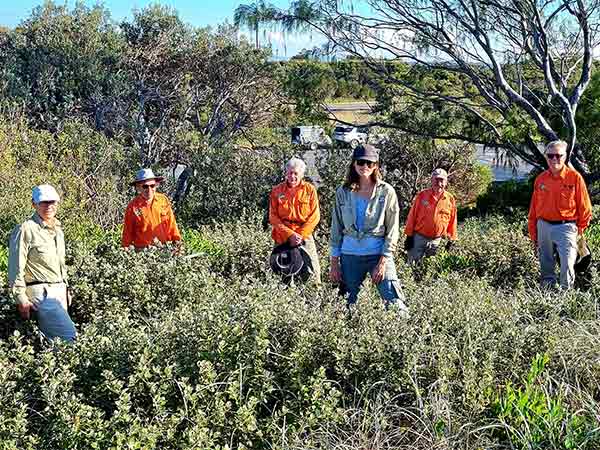 Competition for the prestigious 2022 National Coastcare Award is heating up with the full list of finalists being announced today.

With a diverse range of projects ranging from the protection of endangered flora and fauna along Victoria’s Bass Coast by Friends of Bass Strait Islands to the removal of 2,500kg of marine debris from some of the most isolated beaches in Australia by Arnhem Coast Clean Up, leaders in landcare-led protection of Australia’s coastal and marine ecosystems will come together for the winner’s announcement at the 2022 National Landcare Awards on 24 August.

“This year’s finalists showcase the fantastic range of ways landcarers and Coastcarers from across Australia are taking action to protect our coastlines. I hope their sensational work will inspire more communities to get involved with Coastcare activities to safeguard the unique flora and fauna that call our coastlines home.

NSW finalist, Budgewoi Beach Dunecare’s Phil Heaton, said that he was thrilled the group’s work was being recognised, and hoped it would inspire communities across Australia to take action to protect their local coastlines.

“We’re incredibly proud of what we have achieved over the past 27 years and it is fantastic that our work is being acknowledged on a national level,” said Mr Heaton.

“Through activities including installing stabilising fences, access ways and raised walkways, weed removal, and planting native trees and shrubs, we have been able to overturn decades of degradation and restore ecologically endangered communities here in Budgewoi.

“I want other communities to know they can do it too. There is increasing recognition of the value of our coastal ecosystems here in Australia, and a growing appetite for participation in landcare that we need to take advantage of,” said Mr Heaton.

Commencing coastal rehabilitation works along Budgewoi Beach in 1995, Budgewoi Beach Dunecare has been instrumental in successfully implementing innovative restoration techniques along 2km of the Budgewoi coastline, improving biodiversity and overturning decades of dune degradation. They have also partnered with primary, secondary and teritary education institutions, fostering a passion for coastcare in the local community and inspiring future generations. See profile

CPRRA and Friends of Harmers Haven have been working together to protect pockets of rare and endangered flora that provide habitat for vulnerable fauna including the Southern Brown Bandicoot, Orange-bellied Parrot, Hooded Plovers and Lewin’s Rail. Their highly successful projects include species monitoring, weed control, feral animal control and targeted revegetation. See profile

Wildcare group FoBSI, have been managing feral plant species including infestations of boxthorn and mirror bush on the off-shore islands in the Furneaux Islands and strategic coastal areas of Flinders Island. By undertaking meticulous weed control on over 250 hectares, they are contributing to securing penguin safety in the area. See profile

Formed in 1978 by a small group of passionate community members determined to save the Busselton Jetty from demolition and secure its heritage, the members of Busselton Jetty Inc are now leaders in conservation, protecting the land and marine environments surrounding the Jetty and Geographe Bay through marine conservation and education. See profile

Arnhem Coast Clean Up is a community group formed by non-Indigenous residents living in Nhulunbuy, to assist the Dhimurru Rangers with the removal of marine debris from approximately 80km of coastline. Initiated as a community clean-up, the group now holds six events per year with people travelling from across Australia to attend and support the removal of 2,500kg of marine debris from some of the most isolated beaches in Australia. See profile

Based in Yeppoon, Capricorn Coast Landcare was established in 1987 by Alby Woller and a group of friends. Since Alby passed away in 2017, Capricorn Coast Landcare has maintained the Envirotrail in the grounds of Yeppoon State School and extended the Fig Tree Creek regeneration program. Last year the group also embarked on a Coastcare project on the dunes at Farnborough Beach. See profile