Search
Projects > LiF May 2018 > Fighting to save Australia’s bananas

Fighting to save Australia’s bananas

By The Australian Centre for International Agricultural Research

You may not realise it, but Australia is in the midst of a battle against an insidious enemy, spreading unseen through the soils of our tropical crop-lands. The cost of losing this fight could mean the end of one of our most successful rural industries—bananas.

Making matters worse is that Fusarium Wilt—commonly known as Panama Disease—is part of a trio of problems spreading out of Asia and threatening to decimate global banana supplies. Researchers in the southern Philippines working on an ACIAR project.

The Australian Centre for International Agricultural Research (ACIAR) has been on the front lines of this biosecurity battle for over a decade, with knowledge gained from overseas research projects proving invaluable to slowing the spread of Panama Disease in Australia and other partner countries.

Panama Disease is caused by a soil-dwelling fungus that blocks the water-conducting tissue in the stems of banana plants starving the plant of water, causing the leaves to turn yellow, wilt and die. First detected in 1990 in Taiwan, Panama Disease Tropical Race 4 (TR4) spread rapidly throughout South-east Asia, wiping out the Cavendish-based industry in Malaysia and appearing on Australia’s doorstep in Indonesia in 1994.

The following year, ACIAR funded projects evaluating the resistance of different cultivars to TR4. Disease-tolerant cultivars that had allowed banana cultivation to continue in Taiwan were introduced as a stop-gap measure, enabling Indonesian farmers to continue some production even in the presence of Panama Disease. Research through ACIAR-funded projects continued in the late 1990s and early 2000s but, despite the researchers’ best efforts, TR4 continued to spread throughout Asia, reaching the Philippines, the sixth-largest exporter in the world, in 2005.

Due to the knowledge gained in Indonesia from earlier research, the Philippine Government partnered with ACIAR to develop a project helping defend smallholder banana farmers from being devastated by TR4. The ensuing project was run by the Queensland Department of Agriculture and Fisheries (QDAF).

In March 2015, Australia’s banana industry received news it didn’t want to hear: a plantation in far north Queensland had tested positive for TR4—Panama Disease had made its way to Australia’s production centre. 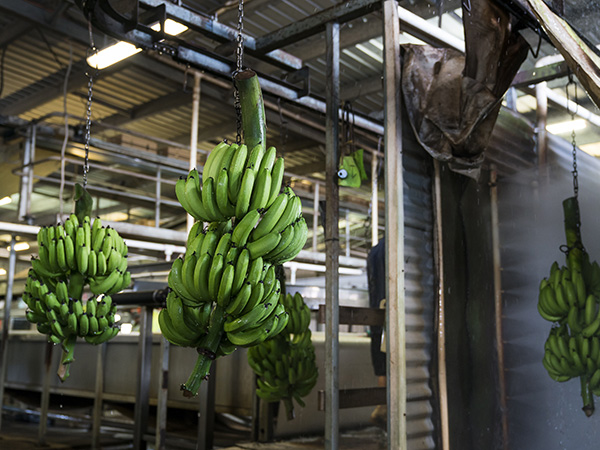 Bananas move along a conveyor belt during post-harvest quality control.

Despite the setback, Australian farmers were determined to keep TR4 from spreading, with knowledge gained on previous ACIAR projects overseas helping contain the outbreak.

“The experience we gained [on the ACIAR project] in the Philippines proved timely for Queensland and the value of that experience has been acknowledged by everyone in the banana industry and the Queensland Government,” says Dr Tony Pattison from QDAF who led ACIAR projects in Indonesia in the mid-2000s.

“The project identified that the amount of TR4 inoculum in the soil is responsible for overcoming the resistance of banana plants,” Pattison says. “That makes it paramount to keep levels of Fusarium low and, to do that, practices are needed that encourage growth of beneficial soil organisms.

“Biodiversity is the key to breaking the Fusarium wilt disease cycle,” says Pattison. “It converts the plantation environment into something more complex and challenging than a monoculture of banana clones in a biological desert.”

Since 1990, ACIAR has invested over $AUD3.3 million in research aimed at minimising the spread of TR4 and its impact on both smallholder farmers and commercial growers. ACIAR is currently funding a project in the Philippines and Australia bringing together experts from both countries. The collective action stemming from these initiatives is the best chance for managing Panama Disease, reducing the impact on farmers and saving the world’s favourite fruit.