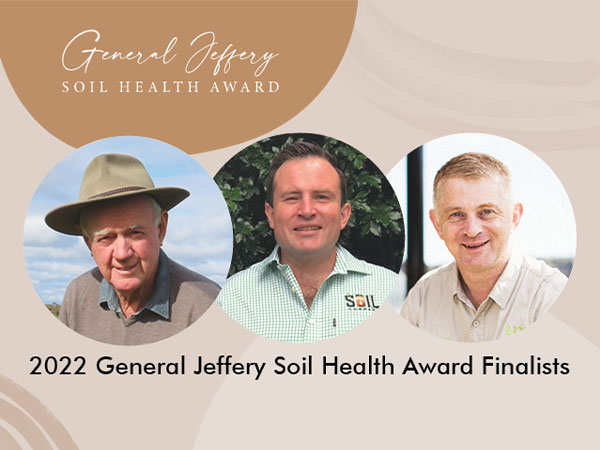 Three leading experts in soil health have today been announced as finalists for the 2022 General Jeffery Soil Health Award.

The prestigious Award recognises the work of people who care for soil health and who are educating or inspiring others to do likewise. It is open to any individual farmer, land manager, extension specialist or educator who is helping improve soil health in Australia.

The General Jeffery Soil Health Award is presented biennially alongside the National Landcare Awards. The Award includes a trophy and a $20,000 cash prize for recipients to continue their work.

The 2022 Award will be presented at the Awards Gala Dinner during the National Landcare Conference in Sydney on Wednesday 24 August 2022.

Finalists for the 2022 General Jeffery Soil Health Award are:

Roger Groocock from South Australia: Roger is an innovative farmer who has dedicated more than 40 years to pioneering soil amelioration techniques that have improved the health and productivity of many tens of thousands of hectares of sandy soils across southern and western Australia. Considered to be an early adopter of technology and a leader in soil modification processes, Roger has worked tirelessly to design, test and measure the long-term effects of a range of soil amelioration techniques, including clay spreading, deep ripping, delving, inversion and spading. Committed to sharing knowledge, Roger has hosted numerous on-farm research trials and crop walks, and has built a community of practice that shares the latest knowledge and new ideas to ensure on-ground change.

Dr Oliver Knox from NSW: Oliver is a researcher in cotton farming and soil health who has developed and delivered numerous field workshops to the cotton production areas of Australia. In 2014 he reintroduced soil biology into the University of New England undergraduate syllabus, and since 2018, he has driven the Soil Your Undies soil health program in Australia – initially using it as an educational tool with farmers, but with COVID restrictions, the program was adapted to a postal and online citizen science challenge. Coverage of the program is thought to have brought the concept of soil health to an audience of over half a million Australians, and educated an estimated 12,000 school children in soil health.

Prof John McLean Bennett from Queensland: John is a dedicated soil health advocate and educator who, in becoming a soil scientist himself, recognised the lack of soil science capability development to serve Australian industry. John served in leadership roles at Soil Science Australia for nine years, and established the Training Board and conceived the Recognised Soil Practitioner as a means to provide professional development in soil management. Through leading the soil science teaching capability and capacity review for the Australian Soil Network, he also identified the need for specialist soil services to be developed. In 2021, John co-founded The Soil Company to work directly with farmers on the development of soil health management plans.

The General Jeffery Soil Health Award is initiated and sponsored by the Office of the National Soils Advocate and is administered by Landcare Australia.

To read more about the finalists and for more information on the General Jeffery Soil Health Award, visit http://generaljefferyaward.com.au/