As part of CSIRO’s inaugural AgCatalyst in Sydney in December 2016, a number of teams competed in the AgData Challenge, looking to understand how big data can be used to benefit farmers.

National cropping company, Lawson Grains, provided access to a variety of data collected during their regular farming practices, and set the teams the task of interpreting the data and collating it in an understandable way.

“We are collecting an immense amount of data across our business and this data has the potential to strengthen our decision around nutrition, machinery logistics, staff productivity and much more,” Russell said. 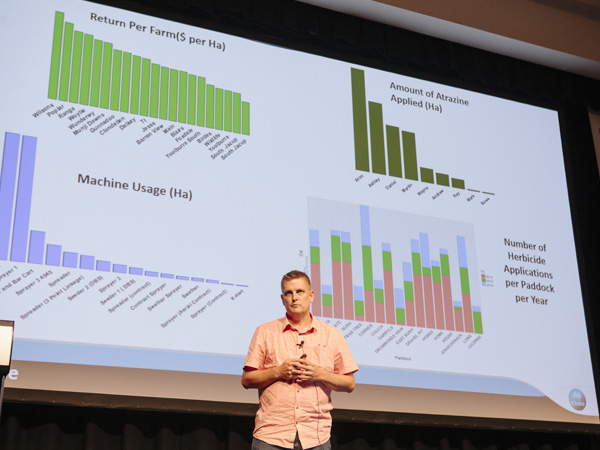 Winning team leader and CSIRO scientist Ross Searle said most farmers don’t have the capacity, the time, or the software to analyse the raw data that their equipment generates.

“Bringing the disparate data sources together into an open source format that we could easily access and analyse was a challenge for our team of data scientists, so you imagine it would be a problematic task for most farmers,” Ross said.

Second place was awarded to a team of PhD students from the University of Sydney.

It has only been in the past decade that equipment with data-capturing capabilities has begun to be widely available. However, farmers are struggling to see the benefits of this captured information, and that is where big data could hold the key.

“Think of every crop you plant as a separate experiment, where you capture your own data such as your crop variety, soil type, rainfall, fertiliser usage and yields.

“However, by taking that next step and making that data available, you can look across an entire region and see how others have performed with different methods, which could enable farmers to make more informed management decisions.”

Despite the hype around big data in agriculture, not many people are actually working in the domain due to the current difficulty in obtaining data from separate proprietary farming systems that do not communicate with each other.

“Going to individual farmers and collecting information can be difficult. However, working with data from a large organisation like Lawson Grains made it possible to explore these issues easily,” Ross said.

“It was a positive step towards understanding how we can bring this information together and help farmers, consultants and technology providers to benefit from this data.”

From Lawson Grains’ perspective, Russell said the AgData Challenge was an opportunity to consolidate its data gathering systems.

“The Ag Data Challenge was extremely beneficial to our business as it gave us a real insight into what we could do with the data,” Mr Cavill said.

“It has prompted us to commence looking at data management systems that will allow us to quickly analyse our data and use it in more future decisions.”

Continued developments in data accessibility will bring the benefits of big data closer to farmers.