By Nicole Spiegel, Queensland Department of Agriculture and Fisheries

Indian couch (Bothriochloa pertusa) is an exotic tropical grass that has invaded native pastures in Queensland. Early introductions in the 1930s and onwards of the grass were mainly for amenity uses, such as lawns and aerodromes across drier parts of the state. Six strains have been identified in Queensland, including commercial releases like cv. Dawson, a superior lawn grass species.

In Bowen, in north-east QLD, Indian couch was recognised for its ability to stabilise eroded gullies, but it also took off like wildfire. Drought and overgrazing are believed to be factors that contributed to the increase in dominance of this ‘Bowen’ ecotype in native black speargrass (Heteropogon contortus) pastures. Although ‘Bowen’ is a less vigorous strain, it is an excellent coloniser. There are now many areas of north-east Queensland where Indian couch has become dominant, often forming complete monocultures. An example of Indian couch monoculture.

Indian couch is a perennial grass that tolerates heavy grazing and provides some carrying capacity for beef businesses. It is also a creeping grass with runners, providing good soil surface cover. However, it is not particularly productive or drought tolerant and has a poor root structure when compared to the desired native or improved perennial pasture species, such as native desert bluegrass (Bothriochloa ewartiana).

Therefore, it is likely that economic (reduced cattle production) and environmental penalties (reduced water infiltration, increased run-off) are associated with Indian couch invasion. There is also some evidence that Indian couch is allelopathic, producing chemicals that inhibit the growth of other plants. This could make the displacement of Indian couch by other pasture species very difficult, particularly once Indian couch is well established.

A scoping study on Indian couch carried out in 2015/16 by Queensland’s Department of Agriculture and Fisheries (DAF) involved consultation with up to 50 beef producers in north and central Queensland. Producers were strongly in favour of research being conducted on management and control options for Indian couch. Regional differences would need to be considered, such as where Indian couch is dominant (i.e. ‘learning to live with it’) versus where it is still invading native pastures (i.e. identifying ways to halt/reverse ongoing invasions), or where it has invaded sown pastures in central Queensland. Both management (e.g. time of grazing and fire) and control options (e.g. complete removal/elimination) would need to be investigated.

Producer feedback has been pivotal in the development of a recent research proposal to address the Indian couch issue. The proposed project will aim to determine the extent and likely spread of Indian couch invasion in north and central Queensland, identify factors responsible for its expansion, and quantify its impact on carrying capacity and livestock production. Work is also proposed to test and identify practical options to either manage or control Indian couch spread on native and sown pastures. 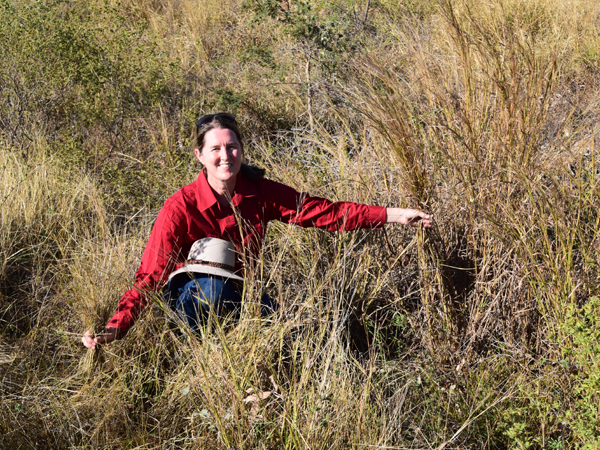 ← Wild rabbits: Working together to get results →
All articles
← Myrtle rust: A threat to Australia’s unique biodiversity →