By The South West Catchments Council

LANDCARE legend Monica Durcan has spent more than 30 years rolling up her sleeves and rallying friends, family, and complete strangers to ‘get things done’.

From creating cattle crossings, to a tree top walk and building an underground tunnel, Monica has dedicated three decades to making a difference in the Western Australia Wheatbelt.

With her eyes wide open after watching the ‘life changing’ 1987 Barrie Oldfield documentary Wheat Today, What Tomorrow? Monica decided it was time to do something for the environment. 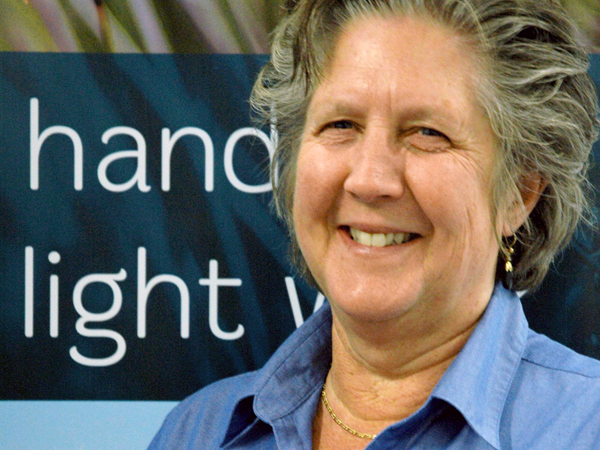 And with that she signed up to volunteer with Men of the Trees, and soon after became their full-time nursery manager.  She didn’t know anything about running a nursery but was good with people and organising. She got the nursery going seven days a week and developed a program of activities for the increasing number of nursery volunteers.

She looks back fondly at that time in the environmental movement.

“It was like this huge dance everyone wanted to be involved in,” she said.  “A huge surge of people wanting to do something positive for the environment. It was great to be part of it.”

After seven years (she says her life works in seven year cycles), she had a quick stint at the Australian Trust for Conservation Volunteers coordinating agroforestry tours in the Wheatbelt, developing Landcare resources, running engagement events, and managing the State Landcare Awards.

In 2000 Monica set up her own business, Landcare Promotions, and was appointed Executive Officer at Avongro.  During this time Monica was busier than ever helping to develop a Private Forestry Development Committee for the Wheatbelt, directing the documentary Greener Horizons and writing the book Branching out Big Time.

She also secured Australia’s second biggest Caring for our Country grant to develop a farm forestry modelling tool for the low rainfall Wheatbelt.

“Let’s find a way of doing this sums up Monica’s approach for me.  Its collaborative, determined, enthusiastic, efficient, passionate and innovative,” Richard said.

Like so many industries where people are driven by their desire to make the world a better place, Landcare employees and volunteers are not immune to burn-out, scepticism or becoming downright jaded.

But according to friends and colleagues, Monica puts everything into her work and has remained as spirited and enthusiastic as ever. She also sees a bright future for the industry she leaves behind.

“I see a resurgence in Landcare and I’m grateful that I’ve seen this before retiring,” Monica said.  “Good Landcare should equal better and healthier production systems with better bottom line for the farmer.”

“Done well at a landscape-scale, Landcare can deliver these and result in healthier waterways and protection of flora and fauna – the whole system. That was always the original intention.”

Well-known for her spirit, passion, creativity and enthusiasm, Monica retired from the South West Catchments Council (SWCC) earlier this year, leaving behind an epic and enduring Landcare legacy.

As SWCC’s Regional Landcare Facilitator, Monica worked with grassroots Landcare and catchment groups in efforts to promote Landcare practices to farmers across the South West.

“It’s not often you meet someone like Monica,” Nerilee said.  “She is one of those rare people who still have such a passion and drive for what they do after so many years. Her perpetual lust for life is infectious.”