By The Birchip Cropping Group

Applying farm fertilisers according to match crop variability can have significant environmental and economic benefits, but only when the approach is right for the season and the paddock.

These were some of the take-home messages from the first year of Birchip Cropping Group (BCG) field trials examining variable rate application (VRA) of fertilisers on a commercial paddock scale in Victoria.

VRA refers to the application of different rates and/or types of fertilisers according to a pre-set paddock map that outlines different zones within the paddock. The objective is to optimise economic and management outcomes by more efficiently targeting fertiliser rates, rather than the traditional ‘blanket’ application approach. 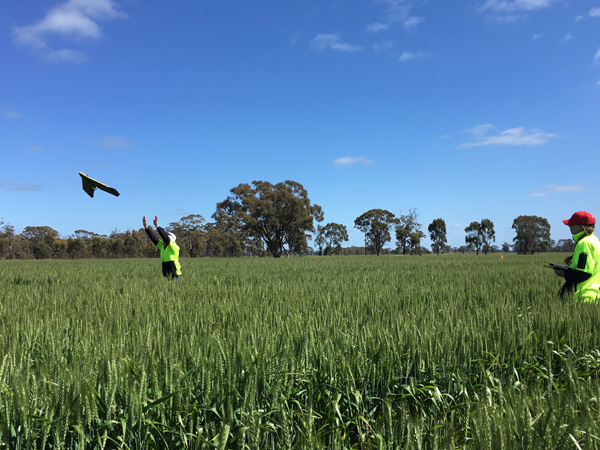 Drones are one of the new tools that are being used to examine variable rate cropping systems in the Mallee.

The study, funded by a Williamson Foundation Scholarship and the Telematics Trust, used replicated test strips to assess the performance of an existing VRA system.

This involved different fertiliser treatments being applied in strips (approximately one-kilometre long) within a wheat paddock. The trial then compared the performance of the crop when grown with a fixed or variable rates of fertiliser, or with no fertiliser, taking into consideration the cost of each practice.

A paddock-scale approach was used to keep the research practically relevant to growers. The methodology also allowed researchers to explore and demonstrate the value of modern precision agriculture (PA) technologies such as drones to both farmers and agricultural researchers.

BCG researcher Cameron Taylor said that although VRA had been around for a while and had proven benefits in the right locations, it was yet to achieve widespread adoption.

“Many growers are interested in VRA but are held back by uncertainty around how to effectively set up their zones and rates,” he said.

“Similarly, modern technologies such as drones could have great potential for broadacre agriculture, but exactly what they can do, how well it works and how much it costs, isn’t widely understood.”

By comparing neighbouring test strips with zero and fixed rates of fertiliser, researchers were able to assess how well the existing zones and rates were capturing and reflecting the underlying variability in nutrient response across the paddock.

NDVI (normalised difference vegetative index) imagery collected over the season (which measures ‘greenness’) and yield maps revealed variation that generally corresponded to changes in landscape and soil type, but showed that the farmer’s current VRA practice may need to be refined to capture and manage it effectively.

The study also reinforced the importance of understanding the underlying causes of paddock variability when setting up effective management zones and rates.

Cameron said it was important to remember however that 2016 was an exceptional season (decile 9 rainfall), and general conclusions could not be made based on just one year of results.

“Our findings, in terms of where things needed to change, and what might improve the system, were generally in line with what the farmer had observed over time,” he said.

“The technologies that we worked with showed real potential to help growers implement VRA effectively, but we also experienced first-hand the practical limitations such as drone battery life that become more relevant in a large-scale broadacre environment.

“Ultimately, technology doesn’t replace a good farmer but can give them new tools for better management.”

In future seasons, the research will continue to investigate the performance of VRA over the long term, as well as demonstrate alternative techniques that can be used to define management zones and rates.

A full report detailing the findings of this trial is published in the 2016 BCG Research Results compendium. To find out more contact Sebastian Ie on 03 5492 2787.