Planting green belts and using a targeted approach to spraying crops allowed cotton and grain grower Andrew Watson to substantially cut down on pesticides on his property in Boggabri, New South Wales.

Andrew did it with the help of native birds, bats, and beneficials (insects that perform valued services like pollination and pest control) who’ve made a home in the property’s green belts, and in turn are feasting on insect pests in the crops.

The motivation toward this shift began 25 years ago when the family noticed the erosion around the riverbanks caused by livestock and non-native willow trees, and a need to create buffer zones around the river to prevent spray drift impacting water quality. To overcome these problems Andrew’s mother and the family got involved with Landcare Australia to undertake the work needed. This included fencing off the riverbank, pulling out willow trees, creating groins to slow the flow of the river, and replanting native trees and plants along the river. 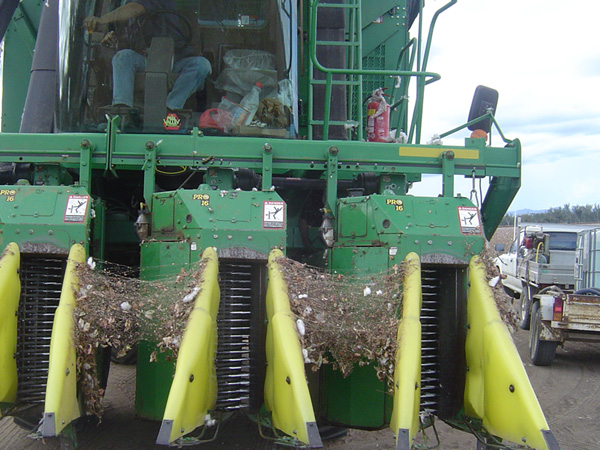 Harvester returns from a sweep through the cotton, the webs show the spiders are thriving amongst the cotton plants.

With the newly revegetated sections established, the birds, bats and beneficial insects returned to the property. The family started measuring the impact the beneficials had on insect pests. Some bat species alone eat their weight in insects every night. The appetite of the bats, and other beneficials, encouraged Andrew to research further to see how he could roll this out across the property.

Adding to the revegetated sections of the river, the Watsons planted green belts around paddocks, linking up areas of remnant vegetation. This linking of the greenbelts meant the beneficials could easily move across the property, especially important for small birds that like to be near shelter to avoid large predatory birds.

Creating the right environment is vital for creating the habitat needed for the beneficials to build up a strong population. In addition, planting diverse winter and summer crops meant the beneficials could move to one crop as the other came off.

Proof the beneficial insects move into crops can be seen during cotton harvest, when Andrew’s harvester is covered in spider webs.

Andrew said he found that a lot of his research and trialling led to outcomes he didn’t expect, and taught him something new. He also said it proved sustainable land management could deliver outcomes that were desirable. It encouraged him to look at farm practices that worked in with the greenbelts.

The Watson family have also adopted alternative strategies to managing pests, such as using overhead irrigation to wash off the honeydew left by aphids. The honeydew cuts down the quality of the cotton, but he’s found with 10 millilitres of rain or irrigation water the honeydew is washed off without the need for chemical sprays.

Andrew said as part of their shift to sustainable practices they’ve tried to use the softest pesticides (on beneficials) for the times when spraying is needed. He’s also taken a targeted approach so only the sections that will have the most impact are sprayed. When combining all these practices, he has virtually cut out the use of insecticide sprays on the farm. When spraying is required it is sometimes targeted only to the field’s perimeter as some pests do not tend to move into the middle.

The outcome for property has not only been better for the environment, but also for the profitability of the operation. Alongside using Bollguard (genetically modified) cotton he’s only had to spray five out of 40 fields once since 2006.

Overall, Andrew said by replanting native trees and encouraging beneficial birds, bats and insects he’s been able to have a positive impact on his property and the community thanks to the significant reduction in pesticides used.