Over the virtual fence

Your neighbour need not be over the fence, according to rangeland grazier Gus Whyte. With social media, the web, and email Gus has created a network of graziers that share information in order to improve the way they manage the land.

This different approach was sparked by the difficulty in finding information that addressed the particular needs of rangeland environments. Gus explained the rangeland properties he, along with his family, manage are complex environments and vastly different from the higher rainfall improved pastures that most people identify as Australian grazing land.

With this lack of information, he turned to other graziers through Twitter and online research. Gus said he found other graziers with similar rangelands in Mongolia, Africa and North America (to name a few) who were open to sharing information on how they managed the land, and different ways of approaching livestock enterprises. 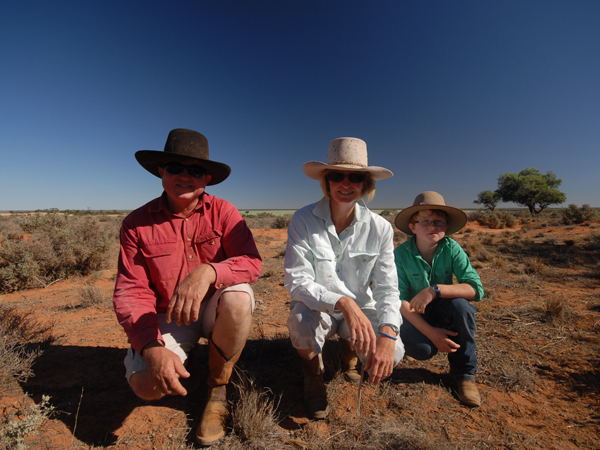 An example of this was the shift to smaller sized livestock he runs on his 19,000-hectare operation in New South Wales. Going against conventional wisdom, Gus said he read that by swapping out larger stock with smaller stock, feed requirements would be reduced, while increasing the profitability of his property.

“Stock will first fulfil their own requirements before they put on weight, reproduce, or grow wool. A smaller animal needs less food to meet their requirements than a larger animal,” Gus explained.

He said smaller stock weren’t sought after and were less expensive to buy, which tied up less capital while his margin remained the same or better.

While he misses out on bragging rights at the pub that comes with higher prices, Gus said the overall impact on the land and his finances far outweighs any dent in ego.

“It’s about being comfortable in what you’re doing. Someone might say that’s wrong, but really it might be wrong for them, and we are doing what’s right for us,” Gus said.

Being able to connect with other graziers via social media has encouraged him to study and read more. Gus also said the outlook that has come from his continual learning has taken him on a journey as he constantly learns new things or finds an alternative perspective.

“If people are sharing their interpretations and how they do things, it challenges your way of thinking and gives you a new perspective to look at the same problem,” Gus says.

It is this diversity in thinking and problem solving that made Gus realise good management requires adaptability and to be open to change to meet the challenge of the season.

“The trick is not to put one bad practice on top of another,” Gus said.

Gus said this sharing of ideas and working together to look after the land was a priority for most farmers, because no one wants to see their property degraded and risking erosion by dust storms or heavy rain events.

For Gus, his farm benefits from good land management which shows in its improved productivity and long-term sustainability. Plus, enjoyment of spending time on the land, and with his family who help manage it, makes the work and time spent worthwhile.

“If we’re looking after the land and respecting our livestock, we get more enjoyment out of what we do,” Gus said.