Agriculture is one of the biggest industries around the Gippsland Lakes, and plays a large part in the health of these significant waterways.

Jenny Robertson of Gracemere Merinos, a wool operation at Bengworden, VIC said decisions made on-farm can have a direct impact on the Lakes. In recent years, the Robertson’s and other farmers in the district have adopted grazing practices that have had great benefits for their properties, profit margins, and the Gippsland Lakes.

The ‘80s and ‘90s were tough on the region, with a run of droughts and the wool price crash. Buying feed, reduced stock numbers, and poor commodity prices led to widespread financial difficulties.

The land was suffering from loss of ground cover and top soil, so when it did rain, there was nothing left to capture the moisture, taking more soil and dumping the sediment in the Lakes.

“By the end of 2008, everything was looking pretty terrible and we were all emotionally, physically and financially exhausted. We were thinking: ‘Is there a future here?’” 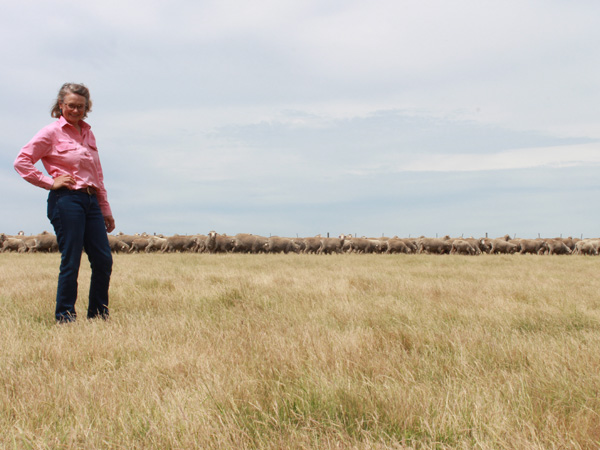 Jenny Robertson on her property in Bengworden, Victoria.

That’s when a chance family gathering, watching a Landline episode on time controlled rotational grazing led to the Robertson’s three daughters saying, “Dad, why don’t you do that?”

The Robertson’s had done Grazing for Profit training with a number of other farmers from the area, but there had been no local support. They implemented some of the principles, but had lots of challenges getting it to work.

Eventually, a group of local famers, all reeling from the effects of the prolonged drought, got together and decided they needed to be more resilient for the next inevitable dry period.

A state government funded training program provided an opportunity – retaining topsoil through improved grazing practices that reduce soil erosion at its source. Together, the farmers formed the Bengworden Grazing Group, a subset of Bengworden Landcare, and successfully applied.

The program included a bus-trip to New South Wales to meet with farmers successfully implementing time controlled rotational grazing principles, and three workshops were held locally and on-farm for each farmer as they started trialling what they had learnt.

“With rotational grazing, you mob up – run your stock in larger mobs, in smaller paddocks and rotate them around according to the recovery period of the grass they need to go into next,” Jenny said.

Jenny explained that the grass needs to be recovered to a stage where it has dry leaf matter on it. Practitioners also match their stocking rates to a 12-months rolling rainfall average, “so if you are budgeting for no rainfall for the next three months, you have a better basis to decide to de-stock early”.

The goal is to get perennial grasses back into the system – they have a deeper root system that decreases as the grass is grazed off and grows again with the grass.

“That process provides a lot of nutrition for the soil, and when the roots are getting down, you are accessing water at a lower level,” Mrs Robertson says. Back in 2008, Jenny said, when the property had no ground cover, a big rain event saw all the water that fell flow down the hill into the Lakes, taking the Robertson’s top soil with it.

“That didn’t give us a good basis for recovery. It took so much longer for things to bounce back because we were starting from nothing. With what we are doing now, if there was a similar event, we could bounce back much quicker.

“We are trying to keep the risk out of our farming system and developed resilience for the tough times.”