Tackling weeds and making friends all part of the adventure Volunteers amongst the invasive bellyache bush

They have been described as one of Australia’s most dedicated Landcare groups. But for Mount Isa Landcare, travelling hundreds of kilometres through north-west Queensland to pull up weeds in hot and dry conditions, is all in a day’s work to do something positive for the environment.

The group calls these journeys “landcare adventures” where volunteers have the opportunity to spend a day or weekend out in the bush enjoying nature and good company while removing noxious weeds and cleaning up rubbish.

Mount Isa Landcare president Mark Van Ryt said it is a great way to see the outback with a purpose.

“One of our core principles is for people to join in and have a good time, but it’s more than just having fun and enjoying nature. We want to achieve something positive for the environment with each bush outing,” Mark said.

There are always new residents moving to and leaving the mining town. The transient nature of Mount Isa means it can often be difficult to connect with the local community.

“We love inviting people who are new to town on our adventures,” Mark said.

“It’s a unique opportunity for them to make friends and experience the area. I invited my dentist to come along one weekend. He asked me, ‘Is that like gardening – in the bush?’ I said, ‘Yeah, it’s exactly like that!’” 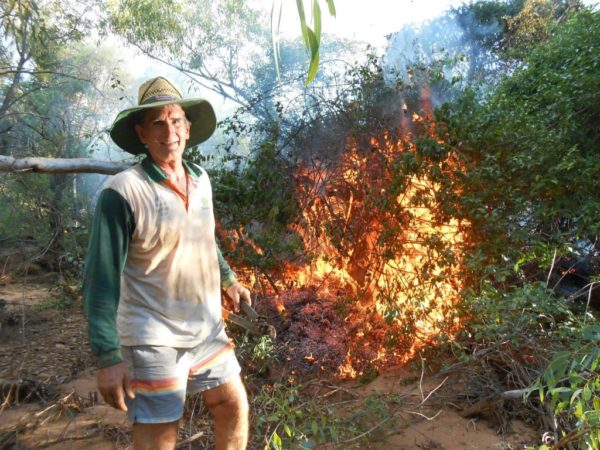 Over the last 12 years the group have been integral in defeating the invasive bellyache bush along the Corella River, an achievement that is believed to be an Australian first. The bush, which has been declared a weed of national significance in Queensland, is native to tropical America and is highly poisonous to humans and animals. It also grows aggressively, out-competing native vegetation and reducing biodiversity.

The group’s strategy in overthrowing this weed has been to remove every bush before it has the chance to flower and seed.

“On a recent adventure we found only eight bushes. We’re proud of our efforts, which is the result of persistence and community action.”

The most difficult and ongoing battle the group faces is tackling rubber vine on the George Creek and Leichardt River.

Regarded as one of the worst weeds in Australia, it was introduced in the 1870s as an ornamental plant and was popular in north Queensland mining settlements, like Mount Isa, due to its ability to flourish in harsh conditions. Sadly, the plant has become invasive to waterways, creating habitat for feral animals and preventing stock and native animals from accessing water.

Last year the group hosted a productive weekend taking volunteers out on a Landcare adventure to cut, spray and burn thickets of rubber vine on the George Creek.

“While a lamb and vegetables were roasting on the camp oven for our dinner, the team got to work destroying 90% of the vine,” Mark said.

“It’s hard work but we make lots of memories.”

The group would like to expand their efforts further, increasing the number of events they host but this takes time and money. The group is managed entirely by volunteers who juggle full-time jobs with their weekend adventures.

“I believe we offer a fantastic experience that most people wouldn’t dare do on their own. But with the support of the group, people feel confident trying something different and learning more about what the Australian wilderness has to offer,” Mark said.

“It would be amazing to be resourced with a local Landcare facilitator who can take this concept to the next level.”

Breathing life back into 4,500 hectares in WA →
All articles
← Involving kids encourages them to love nature and respect the outdoors