The many benefits of multi-storey farming Clinton and Michelle Tepper purchased their 45-hectare beef farm at Buln Buln near Warragul, Victoria in 2011. Clinton has worked as a forester since leaving university and has been involved with planting millions of trees on hundreds of different farms all over Victoria.

However, he would often become dispirited when he heard people complain about problems caused by trees on their farms – including weed and pest animal issues, fire and damaged fences.

Clinton was determined to develop a practical method to add value to trees on farms while reducing some of the common problems they can cause.

In partnership with the Western Port Catchment Landcare Network, Clinton proposed a design for trees to be planted with a larger space between them allowing pastures, crops and cattle to better utilise the land around the trees to fill feed gaps and provide protection, while offering additional income opportunities.

The term ‘multi-storey farming’ came from Clinton’s trade as a forester where the top, middle and lower layers of a forest are referred to as storeys.

According to Clinton, the results were evident from the first planting.

“We realised we could offset the costs of the tree planting by using the space between the trees for early production opportunities. This was a game changer,” Clinton said. 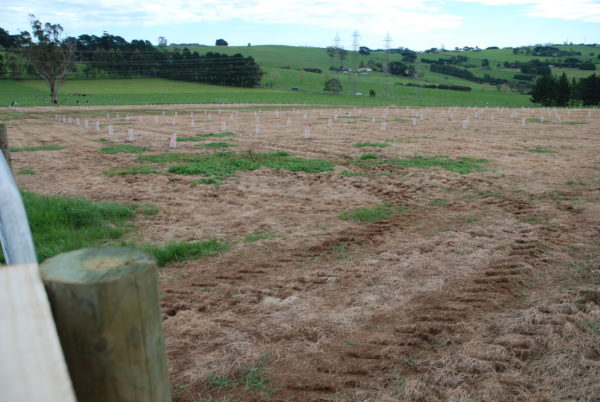 The trial site in October 2014 immediately after tree planting

The system is continually changing in its physical appearance, with the early crops providing protection for the trees, followed by the trees growing and then providing shelter and cover for livestock and the crops. It also allows for livestock grazing and for the pasture or crops between the rows to be harvested for hay, silage or grain.

Clinton stresses that the system is about optimising soil use and photosynthesis through using deeper reserves of soil and intercepting more sunlight, which creates a more robust, productive and diverse system.

The multi-storey trial area on the Tepper’s property was established in 2014. A 1.2-hectare exposed location was selected with the hope it could provide future shade and shelter for livestock. Clinton planted the trees in 13 rows, at 5.25 metres apart. Within the row trees were planted two metres apart.

A mix of silvertop ash, spotted gum and silver wattle were planted. Within one month of planting the trees, different blends of pasture and cereal crops were planted in the rows between the trees. Cattle were first grazed on the site 14 months after planting and now the site is included as part of a standard grazing rotation. Clinton Tepper checking the trees on the multi-storey farming trial site in 2014.

Five years after establishment, the results show that the system works. The trees have grown quickly and more than 70 different types of pasture and crops have been trialled.
Tree management activities are also having a positive impact on soil in the trial area. Tests show good nitrogen levels, decreased sodium and increased soil carbon, bacteria, fungi and mycorrhiza compared with the control site.

The multi-storey farming concept that Clinton and Michelle have created can be applied to other types of trees and the grazing of chickens, pigs, sheep or other animals. It can also be adapted to suit any farm of any size.

Clinton’s design is relatively simple: plant trees further apart and manage the additional space between for crops, pasture and/or livestock. This system allows for a natural symbiosis to occur, improving sustainability, resilience and productivity.

Stage two of the multi-storey farming system is in the process of being established.
“The results of the demonstration trial are changing the direction of where we’re going with the farm,” Clinton said.

This story was originally published in the Victorian Landcare & Catchment Management magazine.