Thirty years of caring for our country. The Landcare story. On a bright July morning in 1989, the late Bob Hawke sowed the seeds of a grassroots movement that has since flourished into a symbol of national pride.

Standing on the banks of the Murray River, the former Prime Minister launched Landcare as a national movement, born from a collaborative approach towards sustainable agriculture and natural resource management.

Thirty years later, Landcare has become the biggest environmental management movement in the country, now boasting over 6000 community groups and hundreds of thousands of dedicated volunteers.

However, the principle of partnership between community, agriculture and conservation was harnessed many years before Bob Hawke’s iconic Statement of the Environment.

As far back as the 1950s, many Australian communities had already practiced this collaborative grassroots approach to confronting environmental issues.

Fast forward to the early Eighties, the emergence of land conservation district committees grew legs after a significant dust storm suffocated the city of Melbourne in 1983, following years of incremental crippling drought. 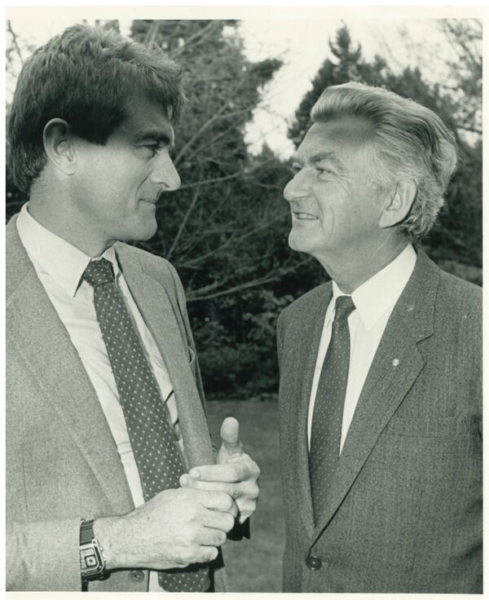 Bob Hawke with one of the architects of Landcare, Phillip Toyne of the Australian Conservation Foundation. Photo: Landcare Victoria Inc. archives.

The term ‘Landcare’ was officially coined in 1986 in Victoria when the late Joan Kirner, then Minister for Conservation, Forests and Lands, and Heather Mitchell, then president of the Victorian Farmers Federation, joined forces after being inspired by the influential works, such as those at Warrenbayne-Boho.

“I think the kind of miracles in halting land degradation are being created by the community and that is what Warrenbayne-Boho are all about,” Ms Kirner said at the time.

The momentous collaboration saw a group of farmers at Winjallok near St Arnaud in North Central Victoria, form the first Landcare groups. For these trailblazer Landcarers, it made sense to work together to tackle their shared environmental problems.

By 1989, having seen the growth and success of Landcare in Victoria, a successful partnership between Rick Farley of the National Farmers’ Federation and Phillip Toyne of the Australian Conservation Society proved an alliance between agriculture and environment could be successful.

“It might have a been an irresistible political alliance but it was such an unlikely one – radical greenies and conservative farmers,” Mr Toyne said during his address at the Rick Farley Memorial Lecture in 2006.

It was enough to convince Bob Hawke, and on that July morning in 1989, during his Wentworth address, he launched the National Landcare initiative, committing $320 million to the program. Prime Minister Hawke also declared the 1990s as ‘the Decade of Landcare’. Landcare Australia was formed in October 1989 and was designed as a conduit between community, government and the corporate sector.

Motivated by a ‘bottom-up’ philosophy, Landcare groups emerged across Australia with the common objective to tackle local environmental issues by working together and creating positive change in their community.

Unique to any other community movement, are the partnerships created between the Australian Government, state and territory governments, local councils, research organisations, farming groups, business and industry, natural resource management agencies and community stakeholders. Over the 30 years, Landcare peak bodies have been established in each state and territory including the formation of the National Landcare Network. From Landcare groups and Landcare farmers, the movement has evolved to now involve Coastcare, Rivercare, Dunecare, Bushcare, ‘Friends of’, Urban Landcare, Indigenous land management, Junior Landcare (including early learning childhood centres, schools, Scouts, Girl Guides and youth groups) and other community groups involved in restoring and protecting their local environment.

“When National Landcare was first started back in 1989, they were hoping to achieve about 2000 groups around the country,” Landcare Australia chief executive officer Dr Shane Norrish said. “Now there are more than 6000 with hundreds of thousands of volunteers. It has surpassed all expectation.”

As the movement celebrates 30 years of national Landcare, it honours its greatest asset – its people. From retirees to families, surfers to farmers and business people to students, it is the passion of these people, mostly volunteers, that is the driving success behind Landcare.

“The majority of Landcare groups draw on their volunteers, their motivation and enthusiasm,” Dr Norrish said.

“Landcare is an incredible social movement. As it continues to evolve and expand, so too will the strong sense of wellbeing and community it brings to preserve and protect the unique Australian landscape.”

The term LandCare was coined by Horrie Poussard (who worked for the Department) in 1986, when the program was initiated and the first Landare group was formed.

In a speech at Wentworth in New South Wales on July 20, Bob Hawke announces 1990 will be the year of Landcare and the 1990s the Decade of Landcare. On October 10, Landcare Australia Limited was formed.

The Decade of Landcare begins with farmers across Australia tackling environmental issues in their local areas primarily through sustainable agriculture. The iconic Landcare ‘caring hands’ logo is created by graphic designer Cliff Burke with Landcare Australia.

Landcare Australia hosts the first Landcare Awards in partnership with the Australian Government’s National Landcare Program. The awards recognise the achievements of those working towards sustainable land use and undertaking on-ground action to protect, enhance or restore an area in their local community.

Landcare Tasmania is formed with an inaugural AGM in September to set the agenda for a ‘grassroots’ focus on the Landcare movement.

Junior Landcare is launched in May, encouraging young people to get involved with their local Landcare group and a range of environmental projects.

Landcare NSW is formed. Community land carers from all over NSW meet at the Landcare Muster in Tamworth and agree to form Landcare NSW Incorporated, a peak body for grassroots Landcarers.

Australian Landcare International is started, promoting and assisting other countries to use the Landcare model. Today more than 20 countries participate in the landcare model.

The National Landcare Network is formed, bringing together the peak Landcare bodies from each state and territory
to represent and support the thousands of Landcare groups, facilitators and volunteers across Australia.

On the 25 November 2016 Landcare celebrates its 30 year anniversary in Victoria.