Top Community Group To Be Honoured With National Award 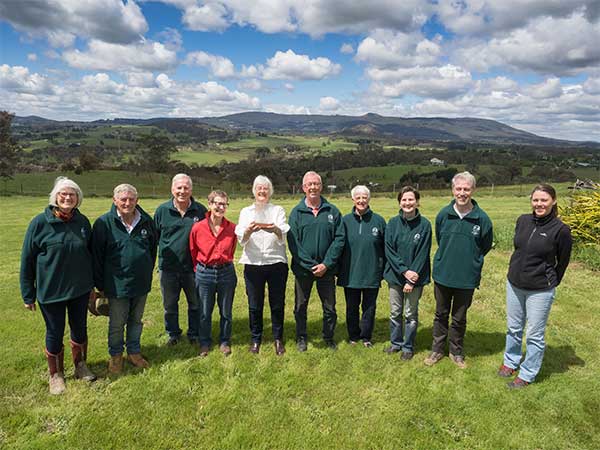 Community groups across the country are looking forward to coming together to recognise champions in their field, with finalists announced today for the 2022 Australian Community Media (ACM) Landcare Community Group Award.

The Award will be presented to one of eight finalists at the prestigious National Landcare Awards to be held in Sydney this August.
Landcare Australia CEO Dr Shane Norrish said the Award is a wonderful opportunity to acknowledge the outstanding work of community groups and their members to protect, enhance or restore their local environment, stewarding a more resilient landscape for the future.

“The finalists show the breadth of activity and initiative taking place in communities across Australia,” said Dr Norrish. “Landcare’s greatest asset has always been its people – and the finalists nominated in this category are testimony to the real and substantial impact that community groups are having on the ground.”

Despite unparalleled challenges such as the COVID-19 pandemic and its associated lockdowns, community groups have continued to dedicate hundreds if not thousands of hours to their focus areas, with the finalists carrying out diverse activities ranging from tree planting and arranging environmental awareness days, to pest control and raising funds to allow for even more volunteers to contribute to caring for the land.

“We are thrilled to once again be supporting the ACM Landcare Community Group Award,” said ACM chief marketing officer Paul Tyrrell.
“At ACM, we are always looking for ways to acknowledge the people and groups that are actively making our communities better places to live. This award helps us to do just that, and at a time when sustainability and restoring our local environments has never been more important.”

Upper Mooki Landcare Inc. (UMLC) seeks to be a proactive and innovative organisation, challenging boundaries and mainstream thinking by providing educational and networking opportunities for its communities. As part of its effort to ensure and promote the protection and conservation of the environment (soil, water, biodiversity on farms and state lands), Upper Mooki Landcare Inc. has implemented a targeted solution for overall catchment benefit that has shown great thought and innovation to a precise problem: to create a more drought resilient landscape. Through the ‘Rehydrating Upper Mooki Catchment’ project, UMLC have used a systemic approach, particularly focused around nine creeks (and ephemeral streams, aquifers and ponds or dams), to retain water in the landscape, combining on-ground works, changes to farming practices, capacity building, and mutual support. UMLC expect that by reducing the loss of water from their local landscape they will support biodiversity and create natural resilience to unreliable rainfall.

Since 2017, Springfield Lakes Nature Care in the Ipswich local government area has held activities that proactively remove litter from waterways, planted 4000 trees to reduce erosion and sediment run-off into the catchment, monitors macro-invertebrates to assess water health and generally contributes to a cleaner and greener suburb. The catchment consists of three lakes and three major creeks. Key projects included Clean Up Australia Day and Keep Qld Beautiful Week events to raise awareness of the marine debris issues; the importance of revegetation; conservation and protection of native flora and fauna. The group also partners with Wildlife Preservation Society Qld (WPSQ) as part of the Glider Corridor Network program and Platypus Watch; participates in National Tree Day events; and established a Bushcare group with local residents with the support of Ipswich City Council.

Passionate about the environment and working with their community, Newham and District Landcare Group (NDLG) has achieved significant environmental outcomes, with a focus on waterway health and protection and enhancement of remnant vegetation. Since forming in 2004, NDLG’s membership has grown to more than 100 households – over 35% of Newham’s population. The group’s main project has been the Cobaw Biolink, which encompasses pest plant and animal control, revegetation, and roadside activities to provide habitat connectivity for native species on both public and private land between Mount Macedon and Cobaw State Forest. The highly organised group has also effectively engaged new property owners, provided advice, collected, shared and published information, secured grants, run many educational and social events and supported environmental education. In particular, over $60,000 was raised for Newham Primary School to purchase materials, undertake school excursions, science classes and run a kitchen garden program.

Seymour Community Action Group Inc. (SCAGI) is a local community group that brings together community members of all ages from the Seymour area. The group’s projects involve restoration of endemic native vegetation, enhancement of habitat, improvements to recreational and aesthetic values, and the restoration of land values resulting in significant achievements. For example, after extensive efforts by SCAGI to tackle a gorse infestation and restore native flora, an extra 54 hectares of land has been incorporated into the Seymour Conservation Area. The work of SCAGI epitomises the aims of the United Nations Decade on Ecosystem Restoration 2021-2030.

Kanmantoo Callington Landcare Inc (KCLG) was founded in 1994. Although membership has changed since then, the group has continued to work on restoring the biodiversity and habitat of the Kanmantoo and Callington district. For a small group with about 30 active volunteers, their achievements are substantial. This nomination is not about one project. Rather it is about a tireless and dedicated group who have initiated and maintained restoration projects across the area for nearly 30 years.

Katanning Landcare is an innovative and passionate Landcare leader who has found local solutions to everything from wind-erosion, salinity and wetland degradation to funding uncertainty. Over three decades, Katanning Landcare has provided landcare leadership including wetland restoration, threatened species recovery, weeds and pests, revegetation, waste reduction and carbon farming that equates to 4.2 million natives planted, 1955 km of environmental fencing erected, over 1000 ha of perennial pastures and also delivered numerous engagement activities to the district of Katanning. The Group has delivered over 220 publicly funded projects valued at $12.5 million and won multiple State and National awards for their work. They also run the Katanning Landcare Centre and recently purchased a revegetation nursery that continues to supply 800,000 native seedlings a year to the Katanning region.

The Roper River Landcare Group (RRLG) consists primarily of landowners, land managers, and residents committed to monitoring, maintaining and improving the Roper River catchment and its natural values in the Mataranka Region. Throughout the group’s history, it has identified many natural resource management threats to the region surrounding Mataranka. Most recently, the threat of Neem. Neem infestations directly threaten the natural biodiversity of the region, the valuable cattle industry and the tourism industry that supports Mataranka in the dry season. RRLGs’ neem management has wide reaching benefits, which include the protection of the main conservation assets for Mataranka including its springs and waterholes, the Roper River, and associated riverine environment.

About the Award: The ACM Landcare Community Group Award acknowledges an outstanding community group that is improving sustainable land use and/or is undertaking on-ground action to protect, enhance or restore the natural values of an area on behalf of the wider community. The winner will be announced at the 2022 National Landcare Awards to be held in Sydney on Wednesday 24 August. Now in its 30th year, the National Landcare Awards is an opportunity to celebrate and honour Landcare champions from urban and rural communities excelling in sustainable agricultural practices, environmental protection, conservation of land and waterways, coastlines and biodiversity.