In Australia it’s estimated we’re using up to 10 million straws per day. That number is staggering, but how do you get people to make a connection between what they consume and where it goes next?

It’s something Ben Simon is working to change. He’s responsible for the Goolwa Coastcare Group project which helps clean up marine and coastal litter from Middleton to the Murray Mouth in South Australia, and he is seeing a change in primary school students engaging with the project.

“One day we collected 121 food wrappers and 18 straws. Then there was 131 pieces of fishing gear, and 236 items of other trash and broken pieces that were unidentifiable,” Ben said.

“It definitely hit home and a lot of the kids started having really healthy discussions while we were going on the walkabout. They were asking questions like “Was it us that brought this rubbish?” or “Where did it come from and are we responsible directly or otherwise?” he said. Funded by Landcare Australia and the Coca-Cola Foundation, the Goolwa Coastcare project has collected more than 220 kilograms of litter from South Australian dunes and beaches since April 2018.

Once collected, the litter is separated into categories and recorded in the Ocean Conservancy’s CleanSwell app. This app is a global database that allows everyone from community members to policy makers see how much litter is endangering specific locations and make a plan for how to change it.

According to Ben, who is now senior project manager of the Eastern Hills and Plains Programs for South Australia’s Goolwa to Wellington Local Action Planning Association (GWLAP), it’s important to have an opportunity to understand and engage with the natural environment early in life.

“Those conversations are really important because these kids are our future leaders, our future land managers and our future dog walkers on the beach,” Ben said.

It was an early love of camping that opened Ben’s eyes to the state of his environment.

“My childhood involved a lot of camping and I was a Scout, so I think I was automatically drawn to sustainability. It made me who I am in terms of my commitment to looking after the environment,” he said. 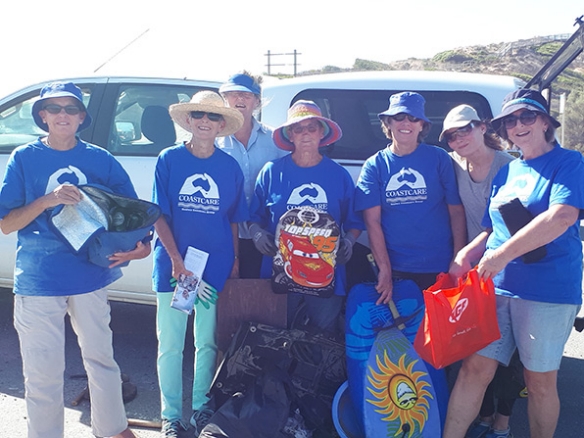 Not only is the Goolwa project working towards teaching our future leaders how to take care of the environment, it’s also working with traditional land owners to protect cultural sites. The traditional owners of the area are the Ngarrindjeri people, and they’ve been a vital part of facilitating the removal of litter across the Goolwa area.

“That’s something that’s been building over the years with the Goolwa to Wellington LAP. It’s been really successful and an amazing experience being able to engage with the traditional owners and work with them to create a better, cleaner place for everyone,” Ben said.

Collaboration between organisations is vital when it comes to reducing the impact of litter and marine debris. In the past two years, the Coca-Cola Foundation has contributed more than $1 million to community projects to research and combat issues around packaging and marine litter. Since 2006, Coca-Cola Australia has supported and funded Landcare Australia’s efforts to encourage all Australians to actively care for land and water assets.

In 2018, Coca-Cola Australia chose to extend its 12-year partnership with Landcare to the organisations Coastcare program, which focuses on the protection and enhancement of coastal environments. Landcare Australia partnerships manager Jo Stentiford is the person who helps match community programs to corporations wanting to fund them.

When Jo found out about Coca-Cola’s global ‘World Without Waste’ strategy, she knew there was a way Landcare Australia could help bring the plan to fruition.

“Most groups are run on a volunteer basis and while they have big ideas and are passionate, it’s often financial funding that holds them back from working on and delivering their projects. That’s why it’s so important to have organisations like Coca-Cola providing financial support. It’s absolutely essential,” said Jo.

A look to the future

Ben is now looking towards the future and making sure the project continues to drive positive change.

“The best way to make change is to use community-based organisations or non-government organisations to engage with communities. We’ve been really lucky and are very appreciative of the support we’ve received from Landcare Australia and Coca-Cola in making this project happen,” said Ben. “I think it’s been a great project that’s really kicked massive goals in terms of outputs in my opinion, and it will continue doing that,” said Ben.

← Summer by the sea →
All articles
← Tackling Tough Times Together Grants →