Glenn and Stephanie Rogers purchased their 1100-hectare mixed grazing and cropping property at Pura Pura near Lake Bolac, Victoria in 2016. The property is no ordinary piece of farming land, with Pink Lake, Salt Lake and part of Blue Lake situated in the centre, covering about 200 hectares.

The lakes are part of the Nerrin wetlands, an extensive series of ephemeral wetlands and shallow lakes scattered across the volcanic plains south of Lake Bolac. The area is recognised for the habitat it provides for many wading and water birds, as well as other important species including the growling grass frog, striped legless lizard, and Corangamite water skink.

Glenn and Stephanie’s property is a significant flocking site for southern brolgas, with more than 70 brolgas gathering there each year prior to nesting. Once widespread across southern Australia, it is believed only 650 southern brolgas remain. Their decline is due to loss of habitat and foxes taking eggs and chicks.

Brolgas require a variety of habitats ranging from swamps to grasslands, in order to roost, feed, breed and rest. Much of their preferred habitat has been lost due to changes in land use and drainage of wetlands for agriculture. Brolgas are also affected by developments like the construction of wind farms that can disrupt their flight paths and nesting areas.

The Rogers’ aim is to have a productive mixed cropping and grazing property where agriculture and biodiversity coexist. Protecting brolga habitat is important, but with a young family and a farm to pay off, there are many priorities to juggle. 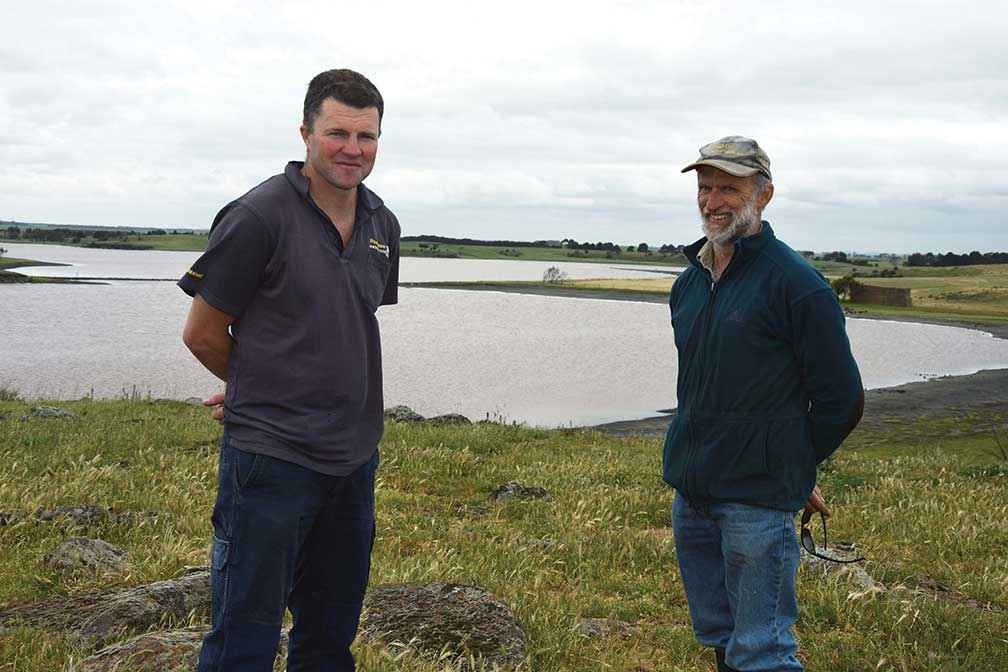 Above: Glenn Rogers (left) and Rod Eldridge on the Rogers’ property with Salt Lake in the background. | Image Source:www.landcarevic.org.au

When Glenn and Stephanie purchased their property they faced a number of challenges. Arable areas around the lakes had been sown with tall wheat grass, a highly invasive species that was spreading, as were paddy melons and other weeds. Stock was at risk of getting stuck in the unfenced lakes, trampling vegetation and causing erosion and bank destabilisation.

Local Landcare Facilitator Rod Eldridge has provided advice and support to assist Glenn and Stephanie. In June 2016, Rod and the Lismore Land Protection Group secured a Landcare Australia Special Projects Grant to help fence sections of the lakes. These grants were made possible through the contributions of corporate partners participating in Landcare Australia’s Workplace Giving program.

The fencing will prevent stock access to the lakes and help Glenn and Stephanie to manage the tall wheat grass, which they intend to replace over time with a more suitable pasture.

Fencing off the lakes in their entirety would benefit the farm and biodiversity, but cost and rough terrain is a major barrier to achieving this quickly. Fox control is also an ongoing activity to protect both lambs and wildlife. Over time Glenn hopes to achieve the best results for his farming operation and for the brolga.

Angela Snowdon is a Landcare Liaison Coordinator at Landcare Australia in Melbourne.